First complete edition, in the original Latin, of one of the most famous and longest of De Thou's poems, a didactic verse in about 2780 hexameters devoted to hunting with falcons and other birds of prey, composed in three "libri" and addressed to François, Duke of Alençon, Anjou and Brabant (1555-84), the youngest son of the late King Henri II and Catherine de' Medici, and brother of the reigning King Henri III. It is the first major Latin work on the subject of falconry. Book 1 discusses the various kinds of birds of prey used in falconry and how to choose one, book 2 discusses their care and feeding, training and the practice of hunting with them, and book 3 discusses their medical care. De Thou anonymously published an advance version of books 1 and 2 at Bordeaux in 1582, but his own correspondence indicates that he had only a few copies of that edition printed, primarily to send them to colleagues (including Pierre Pithou, Claude Dupuy and Joseph Scaliger) for their corrections and suggestions. Harvard University has the only known copy of that edition, and De Thou decided not to complete it but instead to make extensive revisions and add the third book for the present edition, beautifully printed by the King’s Printer in Paris. The poem ends on p. 95, with the next page containing an “important” (Harting) note about the various kinds of birds of prey used for falconry and giving their French and Latin names. The last six leaves contain Thou’s 11-page letter to Philippe Huralt (1528-99), French chancellor under King Henri III, on the subject of falconry, and on the last page the corrigenda. Falconry was so popular in France from the reign of François I to that of Louis XIII that it can be considered the national pastime of the French nobility, as well as the prominent clergy, military figures and politicians in that period, 1515-1643.

With a modern armorial bookplate of the Verne d’Orcet family, whose great library on the subject of hunting was begun ca. 1900. Formerly side-stitched through 4 holes, B1 and B4 no longer conjugate but still securely attached, a faint marginal stain in the lower outside corner of the last few leaves and the foot of the title-page slightly thumbed, but still in very good condition and with large margins. The outer free endleaf at front and back slightly browned, but the binding also very good. 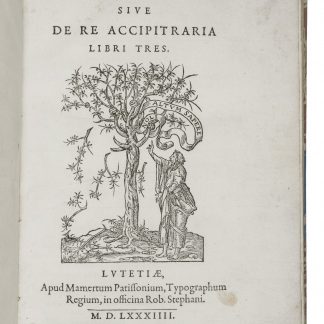