Series of nine letters, notes and cards (all in Gujarati), eight to Jamnabehn and one to Yashwant Prasad, comprising two autograph letters signed, three autograph cards signed, and four cards signed in pencil, discussing Gandhi's diet and health, refusing the offer of a blanket ("one that I have is enough"), and expressing his concern about Yashwant Prasad's heart condition: "Don’t worry about me. I take all the precautions necessary. God is there to take care of all of us. Before the Almighty we are helpless, worrying causes unnecessary problems [...]" (transl.). Jamnabehn, a member of the extended Gandhi clan, was an active weaver of khadi on the charkha and worked alongside Dadabhai Naroji's grandchildren Perin Ben Captain and Khrushed Behn. Most of these letters date from 1926, when Gandhi was living in self-imposed withdrawal from the public world at Sabarmati and experimenting with a diet of fruit. 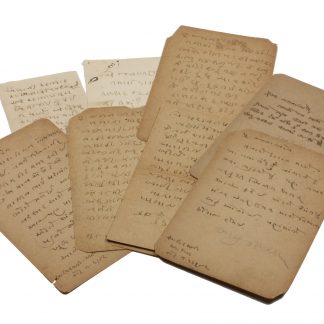