Interesting letter to his friend José Angel Alamo, mentioning the Conspiracy in September waged against him. Bolivar is president of Gran Columbia where he had declared dictatorship from 27 August 1828. A coalition of liberals and military men attempted to take over the presidential palace: Bolivar escaped by the window. The conspiracy was severely repressed including such leaders as Santander punished for his passivity. In this letter, Bolivar mentions his elder sister Maria Antonia Bolivar (1777-1842). Bolivar thanks Alamo for his letter of 20 October full of useful information. Alamo must be aware of the cause of the conspiracy. Santander was arrested in Boca Chica and his supporters sent to Puerto Cabello rather than exile. All will be done to annihilate the rebels.

Some foxing to paper; small slitting to folds; a few wormholes; repairs; stored in a red cloth and half-morocco folder with a photographic portrait on the inner upper board. 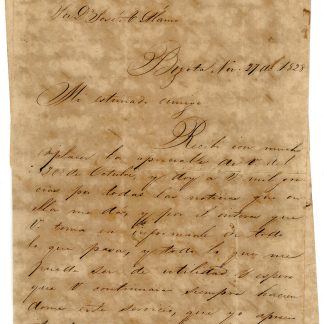