The genealogy of the Arab peoples, printed in Baghdad: early lithography in the Arab world

First edition: a rare and important work on the genealogy of the Arab tribes, also an early, graphically sophisticated lithographic effort from the Arab World. The "Book of Gold Bars" by the prominent Iraqi theologian and historian Suwaydi (1786-1831) is a revised and expanded interpretation of the "Dictionary of the Arab Genealogy" by the legendary Medieval Egyptian scholar Ahmad ibn Ali Qalqashandi; notably, Suwaydi continued the genealogical profile up to modern times. The book seeks to trace the genealogy of the Arab peoples, and the branches of their tribes, from Biblical times up to the age of Muhammad and then to the modern era. The introductory text (pp. 1-7) is followed by the grand, 90-page genealogical table and ultimately by an alphabetical reference section and analytical section (pp. 98-118).

Suwaydi is thought to have commenced preparation of the work as early as 1814, although he did not complete the treatise until 1830 or 1831, shortly before his death. Highly regarded in its time, for some years a small number of manuscript copies circulated in Islamic academic circles. The present publication represents the first printed edition of the work. The second edition was published in Bombay in 1877 (and is likewise rare), while several subsequent editions appeared during the 20th century.

Covers slightly stained. Last 3 leaves with light tide-marking to outer margins and some sporadic light stains elsewhere, but overall in a good clean condition, a few leaves with short marginal tears some closed with discreet old restoration. Very rare: we can trace only six institutional examples (British Library; University of Cambridge; Bibliothèque de Genève; Yale University Library; University of California at Berkeley; National Library of Israel). No examples have appeared on the market over the last generation. 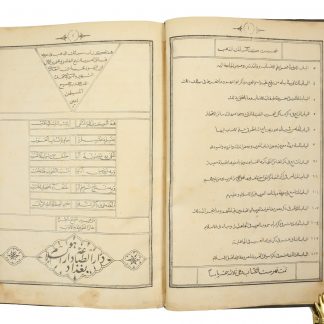