This very rare Ottoman postcard features a map of the Northern Arabian Gulf, including what is today Qatar, Bahrain, the Saudi Arabian Gulf Coast (including Dhahran), Kuwait, Southern Iraq (including Basra), as well as south-western Iran. Interestingly, it shows the Arab Gulf States as being part of the Ottoman Empire, when in reality they were already British Protectorates. The card was part of a series made by Ibrahim Hilmi, one of the premier Istanbul cartographers of the era. 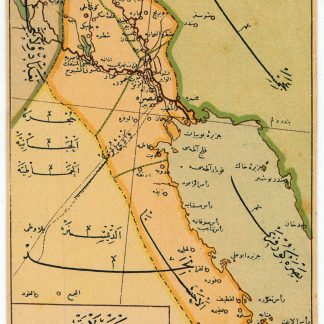