An authoritative handbook on the Arab states of the Lower Gulf

First and only edition of a thorough description of the history of the nine Arab states of the Lower Gulf, that gained independence in 1971, just four years before the publication of this book. The author has managed to discuss the individual politics of each state and that of the bigger picture, making this a handbook for all who wish to learn more about Bahrain, Qatar and the United Arab Emirates (Ajman, Dubai, Fujairah, Ras Al Khaimah, Sharjah and Umm Al Quwain). The several infographics that are used to explain the political structures are very helpful in this respect. Oil plays a key role in the relationship between the individual states and this is intricately laid out by the American author. Because this book was written in such a key moment in the history of the region, it has gained much importance. The author Dr. John Duke Anthony is a leading figure in United States-Arab relations and has held many influential government positions in this field. Amongst others, he is the founder and president of the National Council on U.S.-Arab Relations and he is part of the United States Department of State Advisory Committee on International Economic Policy's Subcommittee on Sanctions. He holds a Ph.D. in International Relations and Middle East Studies at the School of Advanced International Studies. In the years leading up to this publication the author has conducted first-hand research on the Lower Gulf region's political and socio-economic structures, obviously with oil playing a major role. The fruits of this research are presented in this book, offering the reader a comprehensive overview of a complex subject. This book was published in The James Terry Duce Memorial Series, which started in 1966. The first and second volumes were on North Africa and Jerusalem respectively, this is the final volume of the series.

Ink annotations in the margins throughout. A good copy with the original dustjacket well preserved. 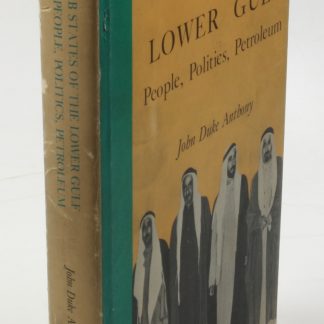