[Marghinani, `Ali ibn Abi Bakr] / Hamilton, Charles (transl.). The Hedàya, or Guide; A Commentary on the Mussulman Laws: Translated by the Order of the Governor-General and Council of Bengal.

First English edition of "al-Hidayah", the authoritative guide to Islamic jurisprudence, printed in a small number of copies only (cf. Brunet). The understanding of Islamic law was critical to the colonial administration of India, and in particular of Bengal with its large Muslim population, and this work was intended to enable English officials to understand local proceedings.

Commonly referred to as al-Hidayah or The Guidance, this work originated as a 12th-century Hanafi work by Sheikh al-Islam Burhan al-Din al-Farghani al-Marghinani (1135-97) and is considered an authoritative guide to Islamic law among Muslims throughout the world. The Hidayah presents a legal tradition developed over many centuries and represents the corpus of Hanafi law in its approved and preferred form. The primary reason for its popularity is the reliability of its statements and the soundness of its legal reasoning. It is arguably the most popular and important work in fiqh literature.

Hamilton's English translation is based on a Persian translation by Ghulam Ya Khan from the original Arabic. Intended for a British audience, chapters relating to rituals were omitted, while his coverage of contracts, torts, and criminal law is more complete. Hamilton explains in his preface: "The permanence of any foreign dominion (and indeed, the justification of holding such a dominion) requires that a strict attention be paid to ease and advantage, not only of the governors, but of the governed; and to this great end nothing can so effectually contribute as preserving to the latter their ancient established practices, civil and religious and protecting them in the exercise in their own institutes [...] they must be infinitely more acceptable than anything we could offer; since they are supported by the accumulated prejudice of ages, and, in the opinion of their followers, derive their origin from the Divinity himself" (Preliminary Discourse). A second edition of Hamilton's translation was published in 1870, though the first edition is rare.

Light browning throughout with occasional brownstains, but generally a very finely preserved copy in an appealing modern binding. 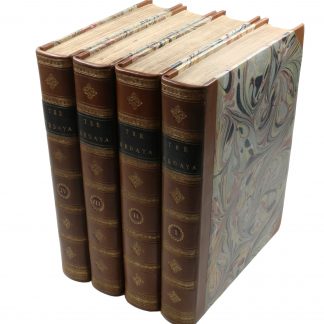