With a double-page plan and 34 tinted lithographed views of the fortified city of Jalalabad, Afghanistan

Folio (full-sheet leaves, 54 x 36.5 cm). Lithographed frontispiece, title-page & dedication plus 5, [1 blank] pp. plus plates. With a lithographed frontispiece portrait of Sale by Thomas Fairland after a painting by Scarlet Davis, a lithographed illustrated title-page, a lithographed dedication to Queen Victoria (reproducing Sale's hand-written and signed dedication), a double-page "Plan of Jellalabad" (51.5 x 60 cm, lithographed by S. Leith in Edinburgh) and 34 tinted lithographic views of the city and its fortifications (in landscape format) on 22 leaves (10 full-page, 2 half-page and 11 pair of oblong half-page, numbered 1-11, showing the fortifications before and after repairs and improvements). All leaves are unwatermarked wove paper, the frontispiece on fine "India" paper mounted on thick paper, the plan on thin paper and all other lithographs on thick paper, that of the title-page grey. With a guard-leaf bound in facing each plate. All lithographs were probably printed by Hullmandel & Walton, though only the frontispiece and title-page name them. Gold-tooled red goatskin morocco, on 5 recessed supports (not aligned with the 6 false bands on the spine), each board with a frame of 3 gold double fillets alternating with 2 blind single fillets, with the title and author on the front board and the 2nd and 4th of 7 spine compartments, richly gold-tooled turn-ins, gold-tooled board edges, yellow endpapers, gilt edges, blue and white headbands.

The first and only edition of a grand and spectacular visual presentation (there are only five pages of text) of the city of Jalalabad and its fortifications in eastern Afghanistan and related sites as far away as Kabul. The illustrated title-page (image size 45 x 35 cm) shows the tower known as Alexander's Column, with mountains and clouds in the background and several people at its foot (including two on horseback in the foreground: a British officer and turbaned man), the whole framed by palm trees, other plants and military attributes, with the title in grey sans-serif and slab-serif capitals with a white drop-shadow. The first 11 leaves of views (2 half-page and 10 full-page, the latter mostly with image size 26.5 x 37 cm) offer meticulously detailed views of sites in and related to Jalalabad, including four in and around Kabul. These show the architecture (including minarets, fortifications and the building where the British were held prisoner) as well as British and Afghan people engaged in military activities and trade. The 11 numbered plates that follow show two panoramas each (nos. 1 and 10 reproducing a hand-written caption) showing Jalalabad's fortifications before (below) and after (above) the repairs and improvements undertaken by Sale. A red line in the upper views indicates the parts that had been destroyed by an earthquake.

Although the title-page attributes the entire work to Robert Sale, the text begins with an account of the city and battle by Hamlet C. Wade, who served under him, followed by "Lady [Florentia] Sale's narrative of her prison & fellow prisoners" and eight short texts giving an account of the view on the title-page and those in the first 10 leaves of views (the 4th to 6th together and the 9th and 10th together), that for the third signed by Florentia Sale.

The grand presentation, the portrait of the author (Major General Robert Sale, who commanded the troops at Jalalabad during the 1842 battle) and the dedication to Queen Victoria suggest this volume commemorates a great success, but in fact it was only a minor and short-lived reprieve in Great Britain's foolish and disastrous First Anglo-Afghan War (1839-1842). In 1839 Great Britain hoped to put Afghanistan back under colonial control by invading it and taking Kabul, ignoring the Duke of Wellington's prescient warning that it was a foolish move, and that they would find it much more difficult to hold Kabul than to take it. The British grossly underestimated the strength of the opposition, the difficulty of the terrain and the country's anti-colonial sentiment. Forced to abandon the city after an uprising in 1841 they tried to retreat to Jalalabad but nearly all the British troops and their entourage were slaughtered in the treacherous mountain passes. Sale's troops, who futilely awaited them in Jalalabad, were surrounded and attacked by the Afghans but managed to defeat them and drive them back to Kabul.

Various sources speculatively date the present publication from ca. 1842 to ca. 1846, but at least in the present copy a footnote on the first page of the letterpress text says, "Since this has been put to press … Sir Robert Sale has gloriously fallen in the battle of Moodkee, fought 18 December, 1845 ... he was struck by a grape shot which ... proved mortal shortly after he received the wound". He died on 21 December, so the book must have been published in the last 10 days of 1845 or early in 1846. Although printed on unwatermarked wove paper, the letterpress leaves show point holes in the centres of the fore-edge and gutter margins, showing that each leaf was separately printed and each is almost certainly a whole sheet, probably of Demy format.

With an armorial bookplate showing the crest and motto ("sans changer") of the Earls of Derby, probably the 14th Earl, Edward George Geoffrey Smith-Stanley (1799-1869), Conservative Prime Minister three times in the years 1852-68. With minor foxing, slightly more in the frontispiece and much more in one full-page plate (Baba's garden, whose paper is not as thick as the others), but otherwise in very good condition. The frontispiece (together with the 2 preceding free endleaves) has separated from the bookblock, the hinges have been restored and the binding shows a few scuff marks, but the binding remains in good condition. Magnificent and detailed tinted lithographs of buildings, fortifications, terrain and life in and around Jalalabad (and Kabul) in Afghanistan ca. 1845.

Thomson, The exotic and the beautiful (Bobins coll.) 268. WorldCat (3 copies?). Not in Abbey, Travel. 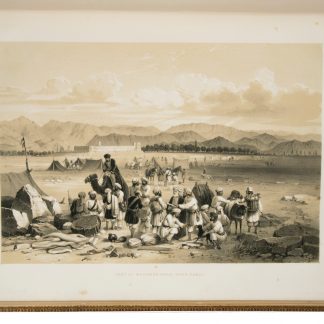