A magnificent copy of a classic world atlas, hand-coloured and sumptuously bound

Folio (340 × 535 mm). Letterpress title-page printed in red and black with an engraved map of the northern hemisphere in a polar projection, engraved frontispiece with a globe and a dozen allegorical figures (with a decorated cartouche at the foot giving the title in Latin), engraved portrait of Homann by Johann Wilhelm Winter after Johannes Kenckel, and 98 engraved maps (93 double-page, 1 larger folding in 2 sheets and 4 half-page together on a double-page plate), many with further inset maps and/or views, all with decorated cartouches, often with pictorial decoration or coats of arms; and 3 double-page engraved tables of topographic data. With the engraved title-page and all maps and tables (except for the small north polar projection on the letterpress title-page) coloured by an 18th-century hand, the maps in part or in outline. Gold-tooled red morocco (ca. 1800?) in a neo-classical style, from the workshop of or in the style of Georg Friedrich Krauss (Vienna).

The Lord Wardington copy of the last edition (1737 with later substitutions by the publisher, probably issued ca. 1762) of Germany's most famous 18th-century world atlas in an exceptionally fine binding, commissioned in Vienna around 1800, and with the frontispiece and all maps coloured by an 18th-century hand. After a 40-page introduction and descriptions by Johann Gabriel Doppelmayr, the atlas contains a celestial chart in 2 hemispheres (with pictorial constellations) surrounded by 6 smaller cosmological diagrams; a Copernican solar system; a world map in eastern and western hemispheres plus 4 smaller projections (2 polar and 2 centred on Europe and the South Pacific); the usual maps of the continents and numerous regions in Europe (including postal maps and maps of river valleys); but also maps of the Black Sea and surroundings (including one with the whole of Turkey); Egypt; the Persian (Iranian) Empire; the Ottoman Empire with the Arabian peninsula and the Gulf; China; Mexico, the Caribbean and most of what is now the United States; and 4 half-page maps of British colonies in America (together on a double-page plate). From the collection of Christopher Henry Beaumont Pease, Lord Wardington (1924-2005), Sotheby's 18 Oct. 2005, lot 193. Some maps are bound out of order (5 groups in reverse order, giving 1-51, 62-52, 72-63, 82-73, 92-83, 100-93, plus 30 & 31 interchanged). Without maps 17 and 22 (Orleans and Lyonnais, but with a 1762 map of the latter with a part of the former), 5 maps very slightly shaved at the head or foot (just touching the outside of the border or the top of the lettering above the border at the head, but with no significant loss), a small tear repaired in the letterpress title-page, some edges slightly frayed, but still in very good condition. An outstanding example of Homann's great atlas in an extraordinary binding. 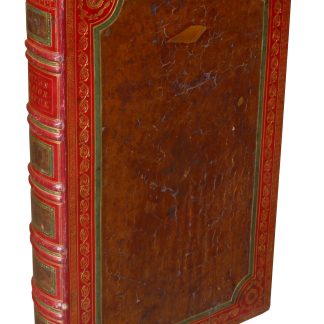