The greatest of star catalogues between those of Ptolemy and Brahe

Editio princeps of Ulugh Beg’s "Zij-i Jadid-i Sultani", in the words of the Encyclopedia Britannica “the greatest of star catalogues between those of Ptolemy and Brahe”. Ulugh Beg (1394-1449) was the grandson of Timur, known in Europe as Tamerlane. In 1409, his father, Shah Rukh, appointed him governor of Samarkand, and he quickly set about turning the city into “the most important centre of science in the Islamic realm” (ibid.), constructing a great madrasah and “the most advanced astronomical observatory of his time […] Although it operated for little more than thirty years […] it made the most extensive observations of planets and fixed stars of any Islamic observatory” (Oxford Enc. of Philosophy, Science, and Technology in Islam, p. 394).

In his preface Ulugh Beg explains that he compiled the Zij with the collaboration of Qadizade al-Rumi, Ghiyath al-Din al-Kashi, and ‘Ali Qushji, the pre-eminent astronomers of the age. Their star catalogue for the year 1437 amounted to “the only large-scale observation of star coordinates made in Islamic territory in the medieval period”, determining the positions of 1018 individual stars. The work significantly revised the findings of classical figures such as Ptolemy and Hipparchos, in addition to those of the later Arab astronomers. The astronomers of Renaissance Europe, notably John Hevelius (1611-87), benefited greatly from these emended readings, which remained in use in the Islamic world until the 19th century (cf. Soucek, A History of Inner Asia, p. 130). Their first appearance in print was in 1648, when the latitudes and longitudes of 98 stars as determined in the "Zij" were published as part of a work entitled "Canicularia" by the English astronomer John Bainbridge (1582-1643). It was only in 1665 that Thomas Hyde, then a young student of oriental languages at Oxford, published the catalogue in full, with a lengthy commentary and a parallel Latin translation. His edition of the "Zij-i Jadid" was also one of the earliest books printed in Oxford to use Arabic types (the very first having been Bainbridge’s "Canicularia"), an innovation that marked a turning point in oriental studies in England. As official printer to the University of Oxford, Henry Hall was responsible for introducing a variety of Arabic, Persian and Turkish works to a European readership for the first time. While Pococke’s "Specimen Historiae Arabum" (1650) offered Europeans an unprecedented amount of new information on the history of the Islamic world, the 1665 printing of Ulugh Beg’s star catalogue introduced them to the scientific achievements of the Timurid dynasty.

Binding sound, albeit a little stained in places. Insignificant brownstaining throughout, due to paper stock, but in all a good, tightly bound copy. 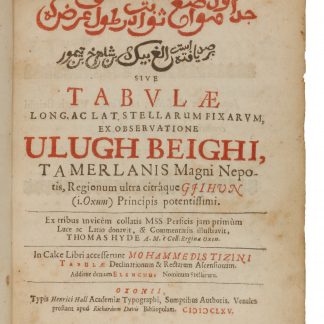