Woodblock in Ottoman Turkish for a Hebrew publication of the Song of Solomon, probably produced in the Ottoman regions of the Levant for a rural printing press. A rare survival of a printing tool, and also an important witness to cross-cultural printing for minority audiences in the Ottoman world.

Includes a print of the text reading "Safr Nishd al-Nishad li-Suleyman wa'ighal ba-l'Abraniyat Sir Hashirim", printed on a piece of 18th-century paper pasted to a cutting from a Croatian printed book ("Pasha Duhovna", on Spirituality and the Passover).

Some small wormholes in the wood, post-dating the print; carved side stained black from ink used for printing. Printing devices such as this are often discarded or recycled and rarely survive in such condition as the present example. 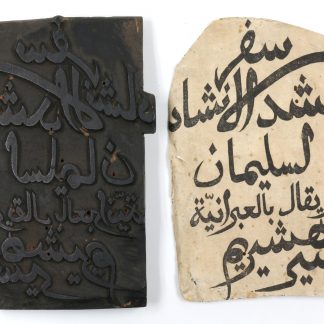