4to. (2), 750 pp. French manuscript on paper. Contemporary gilt and blindstamped full green cloth with giltstamped title to spine and cover.

Appealing, unpublished handwritten travelogue commemorating the French president Émile Loubet's tour of Algeria and Tunisia. Each page is enclosed within blue, white and red borders, with chapter titles and first initials also in tricolour. Apparently a presentation manuscript prepared for Michele Modica, vice-consul of Italy in Algeria, whose name is giltstamped on the front cover, it is signed - and probably written - by the prefecture's huissier Roche. In very neat handwriting, the account describes Loubet's two-week tour of French North Africa from Algiers to Oran, on to Tunisia and back to Marseille, mentioning visits to palaces, hospitals and race tracks, local delegations received by the president, as well as feasts and banquets held in his honour.

An exceptional manuscript befitting the high rank of its recipient. 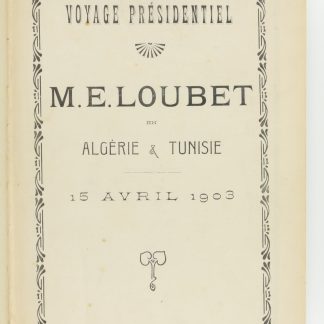