Debates on the French Revolution and Slavery

[Slave Trade]. The Parliamentary Register; or History of the Proceedings and Debates of the House of Commons [...] During the Fourth Session of the Seventeenth Parliament of Great Britain. Vol. XXXVII.

Register of proceedings containing the records of numerous important debates in the Commons on the French Revolution and Slavery, with the abolitionist William Wilberforce tirelessly campaigning and arguing for abolition through the promotion of a number of bills. In February 1793 he had narrowly lost a vote in the Commons where he had been hoping to put pressure on the Lords, and during the sessions of 1793 and 1794 he promoted his Foreign Slave Bill, which would have prohibited the use of British ships to carry slaves to the territories of other countries. The debates in this year also centre on the ongoing situation in France after the Revolution, with concerns that radical agitation would spread to Britain, and Wilberforce believing that insufficient efforts were being made to avoid war with France. 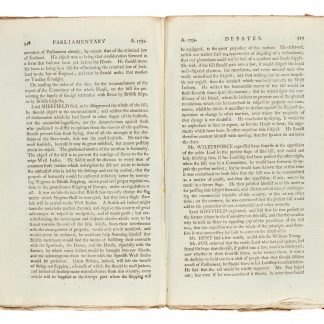 Sie sehen: [Slave Trade]. The Parliamentary Register; or History of the Proceedings and Debates of …London, 1794. € 3.500,00
In den Warenkorb