Uncommon Guide to the Gulf

An uncommon short guide to the Gulf, with chapters on the Trucial Coast (now the United Arab Emirates) and Qatar as well as on Muscat, Bahrain, and Kuwait. While travelling through coastal Eastern Arabia, Tweedy noticed the demand for "some kind of handbook" on the Arab States of the Gulf and the lack of such publications on offer. "Bahrain and the Persian Gulf" was written in response to that need and gives short descriptions of each state and brief accounts of their histories. Each chapter is illustrated with her own photographs, many of which are dignified and sensitive images of the local people.

A few light stains to back cover; head of spine frayed. Small closed tear to p. 31f., but overall near very good. With a loosely inserted greetings card from Bahrain. 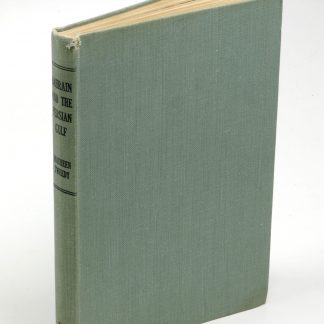