Charming edition of the "Hezaryek-Rouz" or "Thousand and One Days", so called to "give the work an air of originality" (Chauvin IV, 124). The last tome of an original five-volume set of these oriental tales unfolding around the Kashmiri princess Farrukhnaz.

These tales are the translation of a manuscript that the oriental scholar François Pétis de la Croix is said to have received in Isfahan in 1675 from the dervish Moclès, the latter having translated and adapted into Persian the Indian tales known in Turkish as "al-Farage Bada Al-schidda".

Although the work enjoyed far fewer editions and translations than the "Alf layla wa-layla" and is commonly said to be an imitation of the same, it cannot, as Chauvin notes, be determined whether the "Thousand and One Days" or the "Thousand and One Nights" was composed first. Chauvin quotes one commentator who prefers the "Days" to the "Nights", declaring the former "much more ingenious and more realistic, as it sometimes includes marvels, following the taste of the Oriental" (Chauvin IV, 125). Nevertheless, to this day the "Hezaryek-Rouz" is much less known in the West. 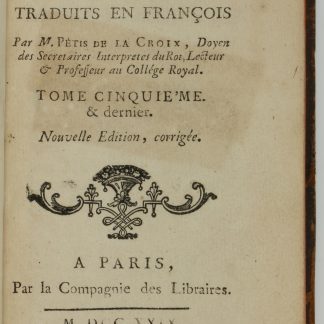