Nizami, Nizam al-Din Abu Muhammad. The Secander Nama of Nizami. With a selection from the works of the most celebrated commentators by Beder Ali & Mir Hosain Ali.

First printed edition of the celebrated Islamic biography of Alexander the Great (356-323 BC) by the Persian poet Nizami, completed ca. 599/1202. Published under the auspices of Sir Gilbert Elliot-Murray-Kynynmound, the First Earl of Minto (1751-1814), and printed in Persian throughout but for the English title.

"The Alexander of the Persian romances is much more colorful than his Western counterpart [...] Nizami celebrates him first as a king and conqueror, then as a sage and a prophet. In 'Iskandarnamah', in addition to being a zealous Moslem, Alexander becomes an ardent lover with numerous wives and concubines" (Southgate, "Portraits of Alexander in Persian Alexander-Romances of the Islamic Era").

Ca. 20 pages with wormholes affecting some text, wide margins. Some browning throughout. Discarded and sold from the Library of Haverford College, Pennsylvania, with their drystamp to the title-page. Later in the Alexander the Great Collection of Julio Berzunza (1896-1952), Professor of Languages at the University of New Hampshire. 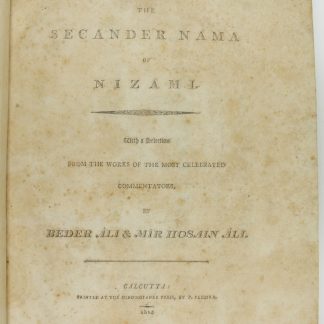 Sie sehen: Nizami, Nizam al-Din Abu Muhammad. The Secander Nama of Nizami. With a selection from the works of the most …Calcutta, 1812. € 3.500,00
In den Warenkorb