To the Harvard law graduate Thomas Henderson Chandler (1824-95), who was applying for the post of usher, or assistant teacher, at the Boston Latin School, which both Henderson and Cooke themselves had attended: "I received your letter yesterday and immediately asked Prof. Lane [the Harvard classicist George Martin Lane, 1823-97] if he would allow you to use his name as a reference. He gave his consent unhesitatingly and I certainly shall have no objections to see my name in such good company. I am very glad to hear that you have obtained so good an opening. A private school in Boston is a sure fortune if successful; indeed it is the only form of teaching which is decently paid in this country. You will always have my best wishes for your success which also I will not fail to enforce with warm recommendations whenever the opportunity offers [...]".

In 1858 the versatile Henderson would take up studying the then-young science of dentistry and in 1860 returned to Harvard, joining the newly formed Dental School as adjunct professor. Cooke's own work at Harvard was instrumental in the measurement of atomic weights, inspiring Theodore Richards, America's first Nobel laureate in chemistry, to pursue similar research. Cooke's 1854 paper on atomic weights has been said to foreshadow the periodic law developed later by Mendeleev.

With 2 small strips of old mounting tape on verso. 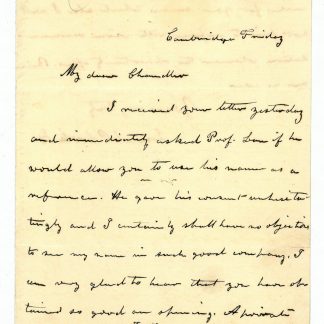