Rare ARAMCO-issued wall map of the Arabian Peninsula, "prepared by the U.S. Ministry of the Interior and the U.S. Geological Survey, under the auspices of the Kingdom of Saudi Arabia, the Ministry of Petroleum and Mineral Resources, and the US Department of State". Printed entirely in Arabic; the annotations read: "The locations included in the basis of this map are dependent upon the best information available to us at their composition in 1942. The exact location of many of these locations goes back to the what the analyses and journies of foreigners showed and is therefore subject to modification. This map does not denote the borders in obscure regions". Other notes on the map indicate that the borders in the southeast, southwest, the Empty Quarter, and the northwest have not been delineated. Curiously, the map retains the designation "Al-khalij al-farsi" for the Arabian (Persian) Gulf, reflecting Arab-world naming conventions of the early 1950s.

Paper brittle; edges chipped; some repairs. Very rare: in spite of having been co-produced by the U.S. Government, today the only copies listed in research collections are those at Princeton, at the University of Manchester, and at the Beirut Library of Human Sciences. A greatly reduced new edition, measuring only 46 x 62 cms, was issued by Archive Editions in 1992. 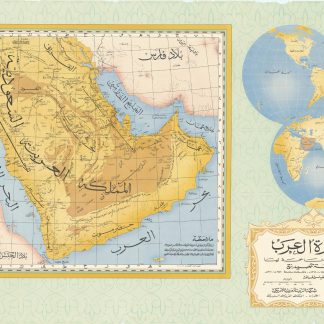