Henri Blaze de Bury's biography of the famous Venetian noblewoman Bianca Cappello, mistress and later consort of Francesco I de' Medici, Grand Duke of Tuscany, was first published over two issues of the "Revue des Deux Mondes" (nos. 63 and 64 of 1884) and again in 1886 as part of his collection "Dames of the Renaissance". The present manuscript with its frequent changes, deletions and corrections as well as occasional excisions constitutes the author's working manuscript as revised for publication; several remaining departures from the published text are probably due to revisions in the galley proofs.

Blaze de Bury inscribed his manuscript to the lawyer, writer and bibliophile Alidor Delzant (1848-1905), executor of the last will of the brothers Goncourt. An autograph letter by Blaze de Bury to Delzant, his "imperfect neighbor" but "most lovely human being", is bound before the manuscript: Blaze de Bury thanks Delzant for his encouraging letter, contrasting it with a negative response to "Bianca Capello“ which had compared the author to Boccaccio, decrying the immorality of the story.

Bianca Cappello (1548-87) was born into one of Venice's foremost noble families. At age 15 she fell in love with a commoner and escaped with him to his native Florence, where they married. Grand Duke Cosimo I granted Bianca protection from her family's attempts to return her to Venice. The marriage was unhappy, and Bianca soon formed an intimate relationship with Grand Prince Francesco, the heir apparent. Francesco, who was married to Joanna of Austria, made Bianca his mistress, and their son Antonio (1576-1621) was born out of wedlock. In 1574 Francesco succeeded to the Grand Duchy and, much to his wife’s discontent, installed Bianca in a palace (Palazzo di Bianca Cappello). Upon Joanna's death in 1578, Francesco secretly married Bianca. The marriage was publicly announced in 1579, and Bianca was subsequently crowned the Grand Duchess of Tuscany. Bianca and Francesco died in 1587 within days of each other, sparking rumours of poisoning. Although Antonio had been legitimized, he was barred from the throne by his uncle Ferdinando, who managed to succeed his elder brother as Grand Duke.

Two pages cut but no loss to text. Paper insignificantly browned and a little fingerstained throughout. Well preserved. 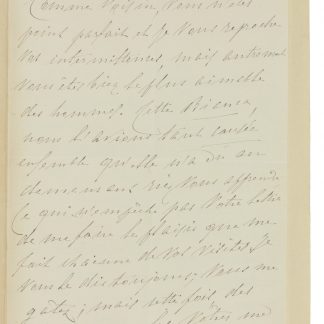