Not seen in the postwar trade: the first edition of the works of Cusanus in a complete and well-preserved copy in its first binding

Small folio (219 x 290 mm). 2 parts in 1 volume. (104) ff. (including 2 final blanks); (170) ff. (including final blank). With 1 full-page woodcut and numerous geometrical and mathematical woodcut diagrams in the text. Rubricated throughout, with dozens of large and hundreds of smaller manuscript lombardic initials (the first in blue, the remainder in red). Contemporary gothic blind-tooled calf over wooden boards on 4 double cords, each board with triple fillets forming a rectangle divided into 4 lozenges and 8 half-lozenges with small stamps (rosettes and fleurs-de-lis) at many of the intersections and one large in each lozenge or half-lozenge (rosettes, lions, eagles). A brass anchor-plate for a boss in the centre of the upper board, remains of a single clasp. Two leaves from a 9th c. Carolingian manuscript used as pastedowns, containing fragments of the Vulgate: II Ezra (Nehemiah) 9:20-26 and 9:28-34 on the upper pastedown; I Ezra 5:14-17, 6:5-9a, and 6:13-17 on the lower pastedown.

Editio princeps: the extremely rare first printing of Cusanus's works, published only 24 years after the philosopher's death and based directly on his self-compiled, authorized final manuscripts. "Toward the end of his life Nicolaus Cusanus put together his numerous writings in two beautifully bound codices (Cod. Cus. 218 and 219 in the library of St. Nicholas Hospital in Bernkastel-Kues) with the obvious intention of preserving them for the future generations [...] The Strasbourg incunabula edition (Hain-Copinger 5893), which was the first printed edition of the works of Cusanus, was published in 1488 in two volumes by Martin Flach of Strasbourg. It was based on Cod. Cus. 218 and 219 [and] contained the majority of Cusanus' theological, philosophical, and mathematical writings" (M. Watanabe, Catholic Historical Review 55 [1969], p. 460). "Nothing is known about the press run, but it cannot have been large. A work published in even 200 copies was considered a bestseller at the time" (cf. Wilpert, p. VII). While E. P. Goldschmidt, head of Gilhofer between 1914 and 1923, was able to offer a complete (albeit rebacked) copy in his 1937 catalogue, the only more recent record of this edition in the trade is an incomplete second volume only, sold at Sotheby's in 1998. The appeareance of a complete set of the first edition in its original gothic binding must be considered an exceptional occasion.

With his Neo-Platonically charged and at once epistemologically advanced reflections, Cusanus is the arguably the most interesting philosopher of his age, a Janus-faced thinker on the threshold between the Middle Ages and the Early Modern period. His ingenious mathematical analogies offered ways to relate the scientific method of inquiry to theological knowledge. In his "Idiota de staticis experimentis" (The Layman on Experiments) Cusanus even wrote about gravity (pt. 1, fol. r2r), anticipating Galileo with his suggestion to time "the fall of bodies dropped from towers of equal height [and taking] the resistance offered by the air into account" (Thorndike IV, 389). He embraced the technological advances of his age and is known to have owned at least one incunable. "In his philosophical writings he broke with the scholasticism which was still the orthodox system. He maintained that all human knowledge was conjecture, and that wisdom lay in recognizing our essential ignorance. To avoid the charge of scepticism [...] he took the view that God can be apprehended by intuition [...] This doctrine was taken up a century later by Giordano Bruno [...], and through Bruno his views came to influence Spinoza, Leibniz and Hegel [...] The view that he anticipated Copernicus is hardly justified [...], but the stimulus which he provided to cosmological thought lasted long after his death" (PMM).

The pioneering Strasbourg publication of Cusanus's works was rather slavishly imitated by the rarely seen Milan edition produced around 1502. A greater impact was made by the edition published in 1514 by Ascensius in Paris: while this was somewhat more complete, as it included material that Cusanus had not selected for preservation, its editor (the great Jacques Lefèvre d’Étaples) took liberties with the text, seeking to improve Cusanus's style from a humanist point of view. The last Renaissance edition was that issued by Henricpetri at Basel in 1565, based on Lefèvre's. Only recently was the definitive modern critical edition completed (Heidelberg, 1932-2004). The present Strasbourg edition, which for the first time made the main body of Cusanus's work widely available to the learned world and often offers the most reliable text, was reprinted in its entirety as late as 1967 (Berlin: de Gruyter, ed. Paul Wilpert).

Provenance: from St. Maximin's Abbey, Trier, with deleted handwritten ownerships on the flyleaf ("Codex monasterii s[an]c[t]i Max[i]m[in]i p[ro]pe t[re]veri", 15th c.) and on fol. A1r ("Ex libris Imperialis Monasterii S. Maximini", 1590s). This latter note is in the hand of Nicolas Peltre (Petreius), a Lothringian monk who rearranged the library's holdings before 1593/95, entering new manuscript ownerships. Peltre died in 1605 as abbot of Saint-Nabor in Metz, where he probably was based from 1598 onwards (we are indebted to Mr Peter Fritzen of Trier for this identification). Later in a Redemptorist library with 19th century stamps and shelfmark label.

One of the oldest monasteries in western Europe (it was a thousand years old even in Cusanus's lifetime), St. Maximin's Abbey lies just a few miles upstream from the philosopher's native village of Kues on the Moselle. The abbey was sacked twice, in the 16th and 17th centuries, before being secularized in 1802. The fine gothic stamps on the cover do not appear in Schunke (Schwencke-Sammlung) or in the Einbanddatenbank hosted by the Staatsbibliothek zu Berlin (online), but the style as well as the early ownership of St. Maximin would suggest that they are the work of a local Rhenish shop, quite possibly produced at the abbey itself: the pastedown leaves appear to have been removed from the rare 9th century three-column Bible known once to have been in the library of St. Maximin, remnants of which are preserved at the Trier municipal library. A description of the Bible, from an unidentified Northern French scriptorium, was published by Reiner Nolden in 1989 ("Über die Reste einer nordwestfranzösischen Bibel aus der Karolingerzeit in der Stadtbibliothek Trier", Scriptorium 43 [1989], pp. 239-247).

A magnificent, wide-margined copy of an almost unobtainably rare work in its original 15th century binding, embodying the spirit of its author's age. 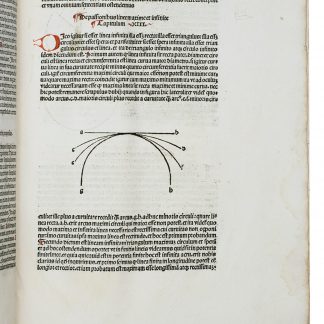