Oblong 12mo (ca. 98 x 52 mm). 1 p., with a similar receipt for another legacy with 4 additional signatures on verso. Evenly browned, a little stained, edges a little chipped. Decoratively framed and glazed with a brass plaque and an engraved portrait (light chipping to gilt frame).

Signature by Johann Sebastian Bach, confirming in his own hand the receipt of 2 guilders ("acc[epi] - 2 fl.") from the Lobwasser Bequest. The sum was paid out around every 2nd of July to the cantor, deputy headmaster, and third teacher (tertius) at St. Thomas. Above and below Bach's signature, his colleagues Conrad Benedict Hülse and Abraham Kriegel sign for their 2 guilders.

One of Bach's several supplementary sources of income which together made up a substantial part of his Leipzig salary, this payment would in the mid-18th century have corresponded roughly to an organist's weekly wages. The "Legatum Lobwasserianum", a legacy of 1000 guilders, was bequeathed in 1610 by a Leipzig lawyer's pious widow, Maria Lobwasser; the 50 guilders of annual interest, paid on the Feast of the Visitation, went toward supporting St Thomas's church and school personnel.

This is one of only two known receipts from Bach receiving his Lobwasser funds. The other, from 1750, was originally written on the same sheet of paper underneath the entry for 1748, but the two records were later cut apart and separated. Curiously, the relevant entry for 1749 must have been made in another, now lost document, as a date "1749" and Hülse's stricken-out signature, apparently made here in error, appear at the bottom of the present slip of paper (formerly between the 1748 and 1750 records). The small 8vo leaf, removed from a receipt book, was complete in 1908 when it was offered at C. G. Boerner's sale of "precious autographs from a Viennese private collection" (lot 3). The buyer was probably the noted Swiss collector Karl Geigy-Hagenbach, in whose "album of manuscripts by illustrious personages", published in 1925, it was again illustrated intact. The receipt's location was subsequently unknown until, in May 1986, the present upper half of the sheet appeared at Christie's manuscripts sale (lot 271). It was likely acquired there by the Canadian chemist and physician Frederick Lewis Maitland Pattison (1923-2010) and subsequently sold by the New York dealer Kenneth W. Rendell (his description pasted on the reverse of the frame) to the Musée des Lettres et Manuscrits, Paris; acquired from their sale.

In December 2014, the lower half (bearing the receipt for 1750, signed by Bach's son Johann Christian in the place of the blind and dying composer) appeared at Swann's in New York, described as having previously been in the collection of the Polish harpsichordist Wanda Landowska (1879-1959), and was bought by the Bach-Archiv in Leipzig. 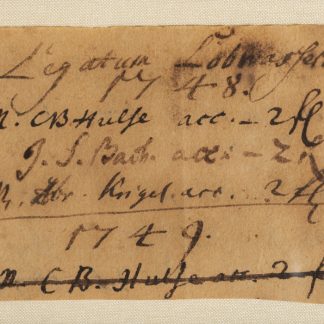