Rare Tchaikovsky manuscript, from an early period in the compositional history of the opera "The Maid of Orleans"

Extremely rare musical manuscript: the orchestral score for a dance from "The Maid of Orleans". Composed in 1878-79, with a libretto by the composer, Tchaikovsky's opera in 4 acts premiered on 25 February 1881 at the Mariinsky Theatre in St Petersburg; in the following year it became the first of Tchaikovsky's operas to be performed outside Russia, with a production in Prague opening on 28 July.

The part in this manuscript belongs to Act II, nearing the central moment of the opera when Joan of Arc's victory is announced: at the Château de Chinon, King Charles VII, absorbed in his worries, seeks to distract himself by listening to the minstrels, and three dances follow one another: "Dance of the Gypsies" (Allegro vivace), "Dance of the Pages and Dwarves" (Allegro moderato), and finally the present "Dance of the Buffoons" (Allegro molto).

Though lacking a bifolium (bars 173-233), the manuscript is otherwise complete in orchestration and includes a number of revisions by the composer. An elegant copy, the manuscript nevertheless shows some haste in writing, with corrections to the text, a whole bar crossed through, and other corrections (with a slightly thicker pen nib) probably made on checking through. The text offers a number of minor variants from the received printed score, chiefly relating to dynamics and slurrings.

The manuscript's dating poses a puzzle: Tchaikovsky was working on the libretto from about 21 November to 3 December, though in a letter to Mme. von Meck he indicated he did not intend to begin composition until after he had finished work on the orchestral Suite no. 1, whose last two movements he completed on 27 November (the same day as the present manuscript). In the event he did not begin work on the composition until 4 December, according to a letter to his brother Anatoli of the following day; at the end of the opera's autograph he writes that it was begun in Florence on 23 December. The present manuscript therefore precedes the accepted dates for the beginning of composition: its finished condition, and the fact that the "Dance of the Buffoons" would not represent the most obvious starting point for the opera, may mean that it originally formed part of a separate composition, and the coincidence of dates hints at some association with the Suite no. 1 itself. Tchaikovsky had left home late in 1878 for a trip to Florence and Paris, arriving in Florence on 20 November.

Provenance: The editors of the Thematic and Bibliographical Catalogue of P. I. Tchaikovsky's Works refer to the composer's "rather careless attitude towards his own manuscripts [...] Many of them were handed to various people and were later partly lost". The present manuscript, of a movement which was subsequently incorporated into a larger work, would have been a suitable candidate for presentation. It was most likely acquired from the composer, or shortly afterwards, by a cousin of Anton and Nikolai Rubinstein, Aaron Rubinstein (b. 1850); at some subsequent stage ownership stamps appear to have been roughly removed from the first and fifth leaves. Sold at Christie's London for Aaron Rubinstein's descendants on 3 June 2009 (lot 41: £97,250).

Musical manuscripts by Tchaikovsky are extremely rare on the market: prior to the appearance of this manuscript at Christie's more than a decade ago, only a single leaf had been offered for sale in the preceding 30 years, and no substantial manuscript had appeared since before the war. Since then, a 16-leaf working manuscript comprising score drafts of several movements of the orchestral Suite no. 2 was sold at Sotheby's in 2015, commanding £270,000. 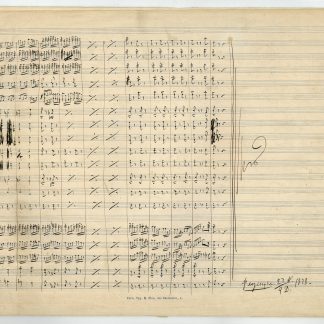