A cross-cultural milestone, unpublished for more than 150 years: a Polish-born Turk's Osmanli Bible, produced under the auspices of a Dutch project for universal peace

A project born of Protestant disappointment with the outcome of the 30 Years' War, the 17th century enterprise to translate the Bible into Turkish was informed by Christian eschatological hopes that Protestantism and Islam might form a political alliance to defeat the common enemy, idolatrous Catholicism, and bring about world peace. To advance this cause, the Czech-born educator John Amos Comenius championed a Turkish translation of the Holy Scripture, whose power alone, it was assumed, would soon convert the Muslim world to Christianity. Enjoying financial backing from the wealthy arms dealer Laurens de Geer and the academic support of Jacob Golius, professor of Turkish at Leiden, Comenius's venture was entrusted to the Dutch ambassador in Constantinople, Levinus Warner.

Though himself proficient in Turkish, Warner chose to contract a translator rather than perform the arduous task himself. After his first recruit, the Jewish dragoman Hâki (Yahya bin Isaak), delivered a manuscript version around 1661 which was found deficient, Warner in 1662 entrusted the work to Ali Ufki Bey, a talented linguist and former servant of the Sultan's. Born Wojciech Bobowski in Lwów around 1610, he had been captured by Tatars as a young man, sold into Ottoman slavery, and given the name Ali. He subsequently served at the Topkapi Palace as a respected musician and translator for about 20 years, eventually gaining his freedom in 1657.

Ali Bey completed his task in December 1664; in 1665 he then proceeded to have a few fair copies produced under his supervision. One of these, in 5 volumes, is very nearly complete; another contains only Isaiah and several books of the Apocrypha. These copies, sent to Golius together with Ali Bey's rough draft in four volumes, today form part of the Warner Collection at Leiden University Library.

Only in 1888 did the Leiden Library accession an additional manuscript copy (Cod. Or. 3100), containing part of the New Testament in the hand of one of Ali's secretaries, with interlinear and marginal corrections by Ali Bey himself. The present volume is the missing part of this New Testament copy, comprising Acts, Romans, Philippians, 1 & 2 Thessalonians, Hebrews, James, 1 & 2 Peter, 1-3 John, Jude, and Revelation. Written under Ali Bey's direction and copied from his personal draft, it, too, contains marginalia and corrections in his own hand (we thank Dr Arnoud Vrolijk, curator of the Warner collection, for his kind confirmation).

Ali Bey's translation, aimed at Muslims as a target audience and full of popular Islamic cultural references, did not find favour with Golius and his colleagues. After Warner, de Geer, and Golius all died in quick succession between 1665 and 1667, the Turkish Bible project ground to a halt, in spite of the fact that Ali Bey was anxious to continue it. Not until 1819 would the New Testament alone be published in a revision of his translation (in Paris), and only eight years later would Ali Bey's entire Turkish Bible see print. A critical edition of his manuscript is still outstanding, and there is ample material for research. It remains unknown from what language Bobowski translated the Bible: "A study of Ali Bey's spellings of proper names, e.g. Petro, Se’mun, Filipo, Pilato, could reveal much about his connections with Christian tradition. Several of these are Italian spellings and suggest a Catholic connection. The fact that Ali Bey refers to St John the Baptist as Yuhanna Ma’madant, a Christian construction of John’s name in Arabic, suggests that he was in contact with the Oriental churches also, perhaps the Syrian Orthodox Church” (Privratsky, p. 19f.).

Provenance: early 18th century autograph ownership of the Hamburg theologian Johann Friedrich Winckler (1679-1738), professor of theology in Hamburg, on the title-page, and successive ownership of the Dutch theologian and orientalist Hendrik Sypkens (1736-1812) below. Subsequently owned by Nicolaus Wilhelm Schroeder (1721-98), professor of oriental languages at Groningen, and sold as no. 24 of his estate auction by van Boekeren in 1835. Purchased in the 1960s from Wrister's bookshop (Utrecht) by a Dutch theologian and acquired from him directly. 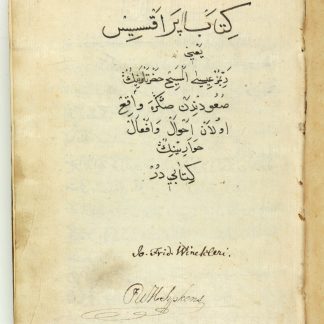