Beautifully printed incunabular edition of St Augustine's "City of God", the seventh printing altogether and the third printed in Venice (after those of Vindelinus de Spira from 1470 and of Nicolaus Jenson, dated 2 October 1475). It comes from the presses of the Treviso-born printer Gabriele di Pietro, whose first productions date back to 1472, and is printed in Gothic characters except for the headlines in Roman characters. Unusually, the printer's name also appears in the headline on the first page of the text: di Pietro also used this feature in other works (such as his Petrus de Abano of 1476, where his name is printed in red).

Complete copy including the initial 14 leaves with the table of contents, lacking only the blank leaves a1 and D10. Several contemporary marginalia, some trimmed by the bookbinder, others very poorly legible due to washing. Rebound probably in the early 20th century, using an 18th century binding (somewhat rubbed and corners bumped). A restored tear and light stains to the margin of the first leaf; browning and traces of moisture on leaves x2-3 with a small hole in the margin of x2. A few initials have been touched in with blue ink, probably at the time of rebinding.

Provenance: Bookplates of the numismatist and bibliophile Jean-Baptiste Colbert de Beaulieu (1905-95) and of Jean Stefgen to front and back pastedowns. 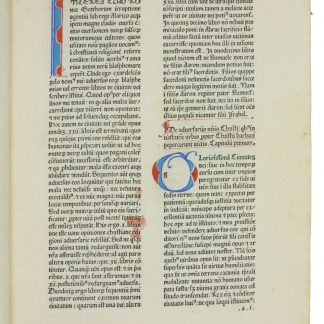