The "beginning of a precious 'commentary'": Magritte's correspondence with André Bormans

Highly interesting correspondence with his friend, the Belgian librarian and writer André Bormans, touching upon various subjects, especially semiotics and the theory of art. In the earliest letter, Magritte invites Bormans for the Christmas holidays and announces that he will show him his latest unfinished paintings: "Particularly: La Joconde, L'Enfance d'Icare and La Colère des Dieux that you will, I believe, enjoy to get to know" (17 Nov. 1960). In closing, Magritte asks whether Bormans can obtain for him Upton Sinclair's 1931 novel "The Wet Parade", which deals with the social effects of alcoholism and prohibition, from the communal library.

Another letter, from 22 October 1963, contains profound semiotic reflections on the relationship between image and word and the effects of the "unification" of word and image. Magritte refers to his famous text-image combinations entitled "Les Mots et les Images" from the last issue of "Révolution Surréaliste" published in 1929, underlining that he now believes that it is more accurate to say that word and image are united rather than re-united: "Depuis, c'est 'unir' qui me semble juste. Réunir obligerait de croire que les choses après avoir été 'unies' ne le seraient plus, qu'elles auraient été désunies. En somme croire à quelque chose d'indifférent". He then gives specific examples from his work such as "La Cascade" and "L'Empire des Lumières", arguing that what the painting "presupposes is partly to be defined". The pictorial representation thus "challenges thinking to be able to think (unite)", which he calls a "contraction", in the case of "L'Empire des Lumières" that of "night and day". To underline the mutual exclusion whose terms are still interdependent, Magritte quotes the Belgian surrealist writer Marcel Lecomte: "The absence of a footstep materializes". Even more dear to him is Louis Scutenaire's statement: "When I exhale I commit a crime". Inspired by his friend's semantic dramatization of something as banal and automatic as exhalation, Magritte exclaims: "What I have painted 'suffices' - What he has written 'suffices' - But not painting and not saying anything also 'suffices'. Your 'The dream requires genius' suffices as 'expression' (expression in the sense of writing, the words not saying what they designate - like in La Cascade, the images not showing what they are)". Magritte closes with the announcement of the title for a painting contributed by Scutenaire: "For a new painting (trees-orange foliage) Scut found a beautiful title: 'The princes of autumn' (which is a beginning of a precious 'commentary')". This section is accompanied by a charming little sketch of the painting.

Just a week later Magritte sends a short letter in which he corrects statements from a previous missive not part of the collection. Magritte writes that he did not express himself well when he was discussing Pierre Étaix's 1962 romantic comedy "The Suitor" and tries to characterize the humor exemplified by this film, referring to a specific scene. He also mentions Charles Muselet's 1866 collection of biographies "Portraits après déces" and a magazine, probably of a Christian cult, that he has been handed in the streets. Finally, Magritte announces that he will send Bormans a photograph of his close friend, the publisher and fellow surrealist E. T. L. Mesens (1903-71).

The latest dated letter, from 18 July 1965, is rather short but includes a charming sketch of Magritte's painting "Le Pan de Nuit" ("The patch of night"), showing a disembodied patch of long red hair in a bowler hat from behind: "The painting on which I am currently working, awaiting its title". He also reports his recovery from an illness, announces two photographs of new paintings ("Le Char de la Vierge" and "Parmi les Bosquets légers"), and recommends Proust's "Contre Saint-Beuve".

Magritte's undated letter offers recommendations for changes to a text that Bormans has written for an exhibition catalogue: "A proposition: 'to enrich our humble means in making the world known' occasions me to ask for a small change that protects the reader from contenting himself with the belief that the 'means' are to be enriched, to be perfected and that knowledge is of secondary importance. This possible misunderstanding could perhaps be avoided in saying: 'to aid our humble knowledge of the world'. The advantage of this phrasing also allows to counter the glorification of the 'means' [...]". The explanation for his final suggestion makes Magritte's anti-positivist stance even more explicit, as he jokes: "or another modification that does not jeopardize 'the subjectivity' that is dear to the experts of 'objectivity'!".

Four of the five letters on stationery with printed letterhead. Well preserved. 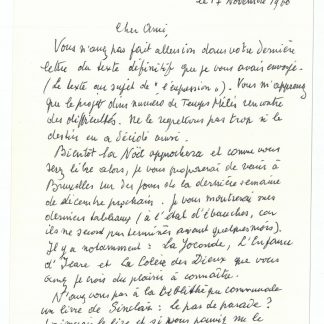