"The terrible man we love": three letters by Stephane Mallarmé

The most important letter in this collection, to his close friend Armand Renaud, was written on 5 Dec. 1869 towards the end of a creative blockage that had begun earlier that same year. Suffering from an old illness and studying for a humanities degree, Mallarmé wished to take a year's leave from his post as a teacher in Avignon. He informs Renaud about his request to the Ministry of Education and his financial worries: "I find myself with hardly enough to get by". Therefore, he asks Armand to inform M. Lebourgeois of his request, who should in turn use his influence at the Ministry to obtain a higher allowance for Mallarmé. He also hints at the abandonment of his first literary project since 1866, the philosophical poem "Igitur", because of his studies: "I worked on what I told you but a serious occupation, which must be that of my forced leisure (the humanities degree in view of the doctorate), will give my thoughts a different direction. To tell the truth, a year of Latin and Greek suddenly appearing is a fortunate and interesting perspective". The Ministry granted Mallarmés leave, and during the year 1870 he worked on a linguistic thesis and a Latin thesis on divinity, neither of which he completed.

Mallarmé did not return to Avignon but stayed in Paris where he tried to launch the magazine "Art décoratif" in 1872. In the undated second letter, addressed to a M. Prunère, he announces that the painter Claudius Popelin (1825-92) would contribute a frontispiece to the project, admitting that he did not dare ask for other illustrations: "I saw M. Popelin who was charming and eager to do me the favour. I thus have the promise for a frontispiece [...] Very happy and very proud of my success, I did not dare mention the little ornament that I would like to see at the head of the first page, a kind of title serving as a transition for the reader who browses between the beautiful frontispiece of the cover and the text columns of the first page where it would be placed at the head [...] Do I dare ask you to procure that, just chatting?". The project ultimately fell through, and the recipient of the letter has not been identified. In 1874 Mallarmé launched the avant-garde fashion magazine "La Dernière Mode" and published a few issues as its sole editor.

The last letter in the collection is written to the sculptor and painter Albert Bartholomé (1848-1928) on behalf of the painter Jacques-Émile Blanche (1861-1942), a former student of Mallarmé. Blanche was hoping that the École des Beaux-Arts would buy one of his paintings following the 1892 exhibition of the Société nationale des beaux-arts at the Palais du Champ de Mars. The painting can be identified with his famous portrait of Marcel Proust, today in the collection of the Musée d'Orsay: "I gathered some information and I communicate it to you so as not to exasperate the terrible man we love. It is necessary that M. Blanche immediately addresses the director of the Beaux-Arts with a request to 'include the no. of his painting in the acquisitions made at the Champ-de-Mars'. This formality is indispensable and it will be followed by a recommendation, which, I believe, will have its effect [...]" (10 May, postmarked 1892).

The letter to Armand Renaud on mourning stationery; the letter to Prunère with deep tears in the folds and some browning but no text loss. 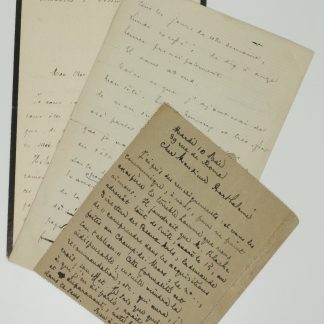