Writing as Bishop of London (1885-96) to "My dear Palgrave", likely the poet and critic Francis Turner Palgrave (1824-97), who had once served as his vice-principal at the experimental school at Kneller Hall, Whitton: "I have kept these an unreasonable time. But I have been well nigh drowned in work. My criticisms you will think petty; and they are petty. But none other occur to me. I am afraid my critical faculty is not worth very much [...]". In 1892 Palgrave published "Amenophis and Other Poems, Sacred and Secular". 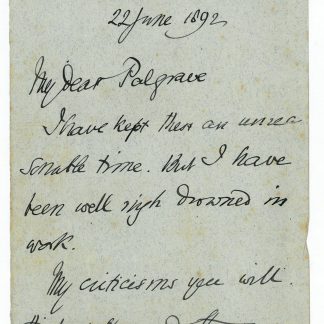