Revised by Türabi Efendi from the text produced by the British and Foreign Bible Society in 1827, the original translation into Ottoman Turkish was prepared by the Polish musician and linguist Wojciech Bobowski (ca. 1610-75), known under his Muslim name Ali Ufki, as an attempt to present the Christian text to the Muslim world. The 17th century Turkish Bible translation had been informed by Christian eschatological hopes that Protestantism and Islam might form a political alliance to defeat the common enemy, idolatrous Catholicism, and bring about world peace. A Turkish translation of the Holy Scripture was to advance this cause: the word of God alone, it was assumed, would soon convert the Muslim world to Christianity. Although Ali Bey, who had been hired to the task in 1662, completed his translation in 1664/65, the first printed edition was not published until 1819, by the Imprimerie impériale in Paris.

Türabi Efendi, who carried out the new revisions for this edition, had in his youth been sent to Britain by the Egyptian administration, learned English and may have even married a British woman; in 1865 he would publish a Turkish cookbook in English. A more common version of this text, further revised by James W. Redhouse, was published in 1857. Possibly the new edition became necessary after the present 1853 edition sold out in the Crimean war (cf. Privratsky, p. 48).

Light brownstaining to beginning and end; sporadic underlined words and annotations in Ottoman Turkish in the margins. Binding professionally repaired at extremeties; overall in a good condition. A single institutional example could be traced (Tübingen University Library). 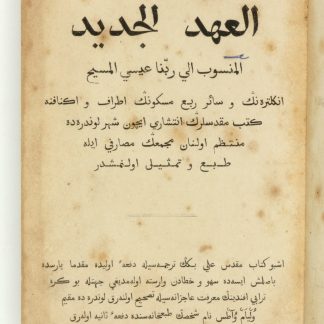