The education of Lord Augustus: "he has lost much time and must study hard to make up for what he has so foolishly thrown away"

Writing as William Henry, Duke of Clarence, to his equerry, the Royal Navy captain A. A. Vincent: "I could not sooner answer Yours enclosing a letter for Augustus which I sent at once: [Sir John] Barton can give you my son's direction: I trust and believe he will do well in every respect with Mr. Mackie at Quarley near Andover: he has lost much time and must study hard to make up for what he has so foolishly thrown away. I am so sincerely interested in your welfare that I hope your excursion to the Continent will do you all the good possible; the Dutchess and myself are tolerably well and leading with my daughters a sensible and quiet life in the country. God bless you [...]".

The Rev. Charles Mackie, M.A., was in 1821 appointed rector of Quarley in Hampshire, where he was the educator of Lord Augustus FitzClarence (1805-54), William's youngest illegitimate son by his long-time mistress Dorothea Jordan. Augustus later pursued an ecclesiastical career, studying Divinity at Trinity, Cambridge (achieving an LL.D. in 1835), and became vicar of Mapledurham in Oxfordshire.

Traces of original folds with occasional small edge flaws. From the collection of John Henderson (1862-1938), the long-serving secretary of the National Liberal Club. 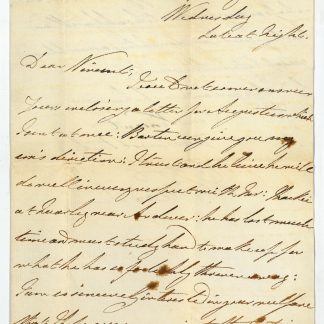