First and only early edition, in German, of an extraordinarily thorough documentation of scholarly academies in the early Islamic world, containing a biographical dictionary of early Arabic scholars and lists of their writings. This is one of the earliest and most important publications of the Göttingen orientalist Ferdinand Wüstenfeld, who based much of it on the ancient biographical dictionaries compiled by Abu-Bakr Ibn Qadi Shuhba and Ibn Khallikan. It covers the 5th to the 9th centuries AH (11th to 15th centuries CE), with accounts of 37 academies in Bagdad, Nishabur, Damascus, Jerusalem, and Cairo, and brief biographies of 254 scholars, 187 listed under the academies where they taught and 67 in a separate section at the end. For most he includes a list of their writings. The German text ends with a 2-page extract, in German translation, from the works of Ibn Khallikan. A 22-page appendix gives the original Arabic text of an extract from Ibn Shuhba, "Tabaqat al-shafi 'iyya", published here for the first time, with an Arabic title-page.

The German orientalist and historian of Arabic literature H. F. Wüstenfeld (1808-99) studied theology and oriental languages at Göttingen and Berlin. He settled in Göttingen, taking a post at the University Library the year after the present publication, and taught at the University there from 1842, becoming professor of oriental languages in 1856. From 1835 to his death almost 65 years later, he published many important contributions to the study of early Arabic texts, covering the fields of medicine, language, topography and geography, often including the original Arabic texts of important works not previously published.

The Arabic type used for the excerpt from Ibn Qadi Shuhba is smaller than that of the Nies foundry, often used in Germany around this time, and quite different stylistically. It may have been produced for Wüstenfeld's works. 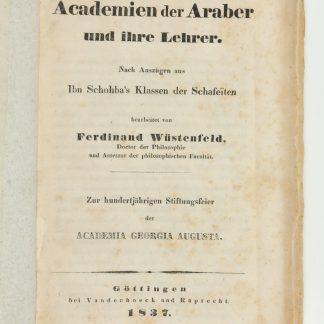