"Will this terrible nightmare ever be lifted from our breast?": Gaston Paris and the Dreyfus affair

Both letters written to thank an unidentified friend for favourable reviews. In the letter from 13 April 1898, the work to which Paris refers is not clearly identifiable. As he goes on to decry the moral bankruptcy of France, Paris refers to the ongoing Dreyfus affair. The politically motivated persecution and condemnation of Dreyfus clashed with Paris's scientific standards and his passion for truth, especially as several philologists became indirectly involved in the case. In February 1898 in the defamation trial against Émile Zola, the defence brought forward five experts from the École Nationale des Chartes, the school for archivist-paleographs where Gaston Paris had been educated and of whose council he was a member. They testified that the only evidence against Dreyfus was in fact not written by him but by another officer. While accurate, their opinion was withheld from the public, and Zola was convicted. This further injustice probably led to Gaston Paris's bitter remarks in the letter: "Your note gave me great pleasure and afforded me a moment of distraction from the painful thoughts that never stop haunting me in light of the sad moral condition of our country and the deep plunge that seems to accelerate with every day. Will this terrible nightmare ever be lifted from our breast? In the meantime, it oppresses us so severely that at times we find it difficul to breathe [...]".

Both letters with traces of former mounting. Well preserved. 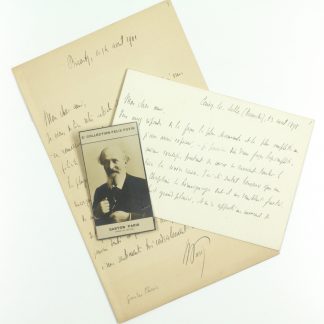