Complete medical manuscript, copied during the lifetime of the author

The introduction (1v-2r) sets out the work's content and structure, presented, with Arabic technical terms adopted into Turkish, as a compendium ("muhtasar") and facilitation ("teshil") of medical knowledge, offering a discussion of definitions, medical practices, the administration of solids and liquids, and a description of diseases with their symptoms and related therapies. The following sections treat dietary matters including regimens for exercise ("hereket"), meals ("gazalar"), hot baths ("hammamlar") and vomiting ("istifrag"), as well as self-medication (4v-15v), fevers ("buhran", 16r-17r), and the therapeutic and prophylactic properties of various foods (17v-26r). The third and by far the most extensive section (26r-67r) provides definitions and summary descriptions of the most common ailments with their aetiologies (proceeding from symptomological analysis, "alamet") and treatments. A single final page (67v) entitled "Kitabu'l-Ihtilac" ("Book of attraction or palpitations") contains apotropaic phrases to be pronounced over the patient and a short poem in 11 couplets, followed by the four-line colophon (68r).

Haci Pasha was a famous 14th century physician from Anatolia who moved to Cairo, then the thriving capital of Mamluk Egypt, to refine his medical knowledge during what is today regarded as the beginning of the most famous period of Ottoman medicine. The present treatise enjoyed significant success for many decades and directly influenced the work of one of the most renowned Ottoman physicians of the 15th century, Serefeddin Sabuncuoglu (1385-1468), who composed the first surgical atlas in Ottoman Turkish.

Margins somewhat fingerstained in places with a light waterstain throughout, but generally very well preserved. 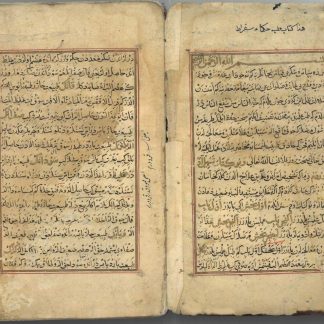