Lamm, Carl Johan. The Marby Rug and Some Fragments of Carpets Found in Egypt. Särtryck ur Orientsällskapets årsbok 1937.

Scarce essay on medieval carpet weaving in Egypt, particularly on the so-called Marby Rug, the oldest preserved oriental carpet in Sweden discovered in 1925 in the abandoned church of Marby in the province of Jämtland. The personal copy of Carl Johan Lamm with his bookplate to front pastedown. In an attempt "to fix the place of the Marby rug in the early evolution of Oriental carpet knotting", the essay discusses 29 fragments of carpets obtained from antiquity dealers in Cairo, including Abbasid rugs, carpets of the "Konya" type, chiefly Seljuq, and Anatolian carpets of the 14th and early 15th centuries, as well as Anatolian or Caucasian carpets of "nomad" type, Mamluk carpets, and Anatolian "Holbein" carpets of the 15th century.

Lamm studied archaeology at the University of Stockholm. He wrote about the glass excavated at Samarra in 1928 and became a leading scholar on Islamic arts and crafts, notably in glass and carpets. He was on the staff of the Stockholm Museum and taught at Uppsala University.

Offprint from the Swedish Oriental Society's yearbook. In near-mint condition. 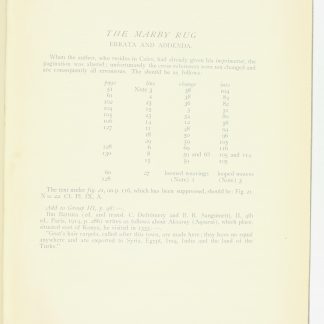 Sie sehen: Lamm, Carl Johan. The Marby Rug and Some Fragments of Carpets Found in Egypt. Särtryck ur …Stockholm, 1937. € 650,00
In den Warenkorb