A fine collection of Egyptian Coptic textile fragments compiled in the 1930s, comprising samples of multi-coloured embroidery and hand-printed linen. Most are of Coptic origin: hand-woven embroideries on linen wraps dated to the 5th and 6th centuries, originally used in tunics or other clothing. The fragments are decorated with human figures, animals and birds, mythical creatures, and floral designs, as well as with geometrical patterns. There are also six scarce blue "Arabic" samples, beautifully hand-printed on linen, from ca 1300 AD, and one woven silk tissue with an arabesque pattern from the 11th century. Four of the Arabic specimens are larger.

Carl Johan Lamm studied archaeology at the University of Stockholm. He wrote about the glass excavated at Samarra in 1928 and became a leading scholar on Islamic arts and crafts, notably in glass and carpets. He was on the staff of the Stockholm Museum and taught at Uppsala University.

Ancient Coptic material of this kind was typically removed from Egyptian graves around the turn of the twentieth century. Lamm may have acquired these specimens while living in Cairo in 1934-37 while assembling a large collection of ancient Coptic textiles, and it would appear that the binder containing the fragments dates from those years. Parts of Lamm's Coptic textile collection are now housed in two Swedish museums; Kulturen museet in Lund and Röhsska museet in Göteborg.

Stored in a worn craft binder, the samples are sewn on paper with hand-written ink annotations and typed descriptions and dates. Several fragments show small losses, but overall most are in fairly good condition.

Includes a printed article by Lamm on "excavated textiles from Egypt", an offprint from the Danish journal "Tilskueren" ("Spectator"). With a few changes, this text was delivered as a speech at the Copenhagen Kunstindustrimuseet in connection with an exhibition arranged by Lamm. The textiles exhibited belonged to Lamm himself, the National Museum in Stockholm, and the Danish Kunstindustrimuseet. This is Lamm's personal copy with his bookplate to front pastedown. 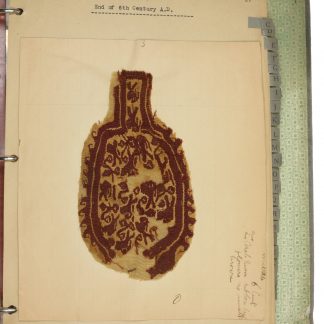