A scene from the play "Lorenzino", which premiered at the Théâtre-Français on 24 February 1842. The subject is the same as in Alfred de Musset and George Sand's 1834 drama "Lorenzaccio": the assassination of the tyrant of Florence, Duke Alexander, by his cousin and favourite Lorenzo de' Medici. This double-page draft gives a variant of Act II, Scene IV, between Michele and Lorenzino. The first page is in prose: Michele is going to perform a scene from the tragedy of Brutus composed by Lorenzino, playing the role of Brutus, and asks Lorenzino to give him the reply, in the role of Caesar. The continuation is in verse, between Brutus and Caesar, until Brutus's reply: "Non Cesar est un Dieu" ("No Caesar is a God").

Some erasures and corrections; note on the content in pencil near upper margin. Small puncture in the centre; margins slightly creased. Folded. 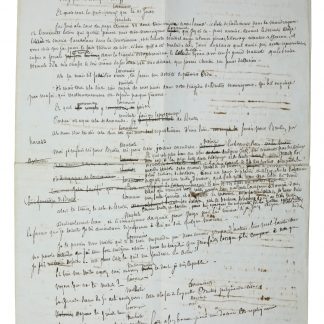