"The dream without sleep": Francis Picabia on art and literature

4to. 1¼ pp. In French. Together with a letter from Picabia's second wife Germaine.

To the French poet and writer Gaston Criel (1913-90), praising Criel’s forthcoming essay "Swing" with respect to Picabia's artistic ideals. This highly interesting letter offers a poetic sum of Francis Picabia's conception of literature and art that is worth quoting in full: "I read the proofs of your book; the few lines that I am sending you are the expression of my thoughts. I have objections to the literature of many: why disguise these objections? I get headaches when this literature begins to act on me; my thought demands elation from literature, even a pirouette; for my heart and stomach would not be happy otherwise. Ultimately, my entire body demands an alleviation from literature: this leaden life must lose its heaviness. Melancholy is everywhere in these horrible books of perfection; that is why I need life. 'Swing' is as alive as swing could be. The comprehension of the true step - this comprehension of illusion is the only bearable thing, that is, for me, the only true thing. Loyalty with the explanation given to it is a subject of disgust. Fortunately this contrary force, art, shows us the way to the dream without sleep. I hope to live all my life, a life of imperfection, on the beautiful river, which reflects the illusion. The horizon of art makes me laugh, and laugh at me. It gave me pleasure to read 'Swing', book of freedom, which places you above things as your ideal requires, to need yourself".

Gaston Criel's poetic debut appeared in 1937; his volume "Gris" (1938) was praised by Paul Éluard. During WWII he was imprisoned in a German POW camp. After returning to Paris in 1945, Criel became André Gide’s private secretary. From 1950 to 1953 Criel lived in the United States, where the Jazz enthusiast met, among others, Louis Armstrong and Dizzy Gillespie.

Germaine Picabia’s letter to the writer and journalist François Jean-Desthieux from 1934 bears testimony to the failure of the marriage: "Picabia has recovered from his furunculosis, he lives on his little boat and looks very sad, I think that I cannot do anything anymore…" (Cannes, 3 January 1934). The couple had been introduced in 1917 by the Mexican painter Georges de Zayas. Both left their spouses and soon moved together. From 1919 onwards their discussion sessions in their rue Émile-Augier apartment became a fixture of the Parisian Dada movement with André Breton, Marcel Duchamp, and Tristan Tzara among the regular guests. The marriage fell apart in the early 1930s when Francis Picabia began an affair with their governess Olga Mohler, whom he would marry in 1940.

Minor browning and a short tear. 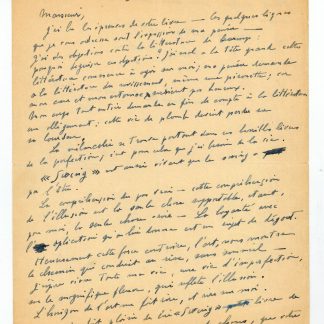