First edition of the travelogue of the Spanish diplomat Silva y Figueroa (1550-1624), who embarked on an embassy to Persia in 1614, hoping to secure from Shah Abbas exclusive trading rights in Persia and its dependencies. As the Latin manuscript was not published and a Spanish translation did not appear until the 20th century, this French translation published by de Puis (as well as the one issued by Louis Billaine the same year) long remained the only available version of the itinerary.

In 1619, Figueroa was granted an audience in Isfahan with the Shah, who sought to conclude a trading agreement with the Spanish but would not subscribe to the ambassador's demands for the restoration of Gombroon and other Portuguese enclaves, nor to the exclusion of the English and other nationalities. Negotiations were suspended and Figueroa ended up returning to Spain, where he arrived in 1624 after an absence of ten years. His account describes Lar, Shiraz, Kašan, Qazvin, and Qom as well as other places including the caravansaries where he stayed, and gives interesting ethnographic data on the non-Muslim communities, such as the Armenians in Jolfa or the Zoroastrians, as well as a precise description of Persepolis and its cuneiform inscriptions. Although Antonio de Goueva (1602) and Giambattista and Girolamo Vecchietti (1606) had already recognized cuneiform as a type of writing, Figueroa was the first person to describe the cuneiform characters as shaped like "pyramids" and "obelisks", thus anticipating Pietro della Valle. Of the Persian dependencies, Ormuz and Bahrain were considered of particular importance, the former for its trade in silks, the latter for pearls: "Mais ce Golfe [...] qui est beaucoup plus long que large, ayant au milieu cette fertile Isle de Baharen [...] si celebre par tout l'Orient, à cause de sa riche & precieuse pesche de perles" (p. 59). Furthermore, Figueroa mentions falcons "larger and stronger than in Europe" (p. 105) as well as "excellent horses" (p. 426), and "the best dates of all of Persia" (p. 94). 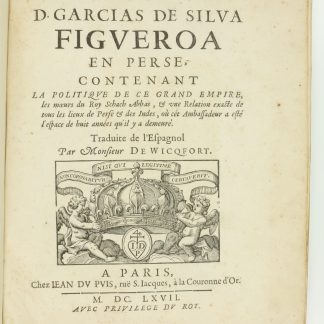