Mao signs an invitation to a Buffet Party

Oblong 8vo (17 x 11 cm). An exceedingly rare vintage blue ink signature, in Chinese characters, inscribed to the verso of a printed invitation to a Buffet Party hosted by the China-Latin America Friendship Association at the Xinqiao Fandian (Hotel) on Thursday, 27 October 1960 at 6.30 pm, "in order to kindly see off the cultural friendship delegations of Latin American countries". Chinese text printed in red on off-white paper. Encapsulated.

A fine signature obtained during a 1960 Buffet Party in honour of Latin American communists, held at Beijing's Xinqiao Hotel and attended by Mao Zedong. The China-Latin America Friendship Association, who hosted the venue, was established in Beijing earlier that same year, in March 1960, and soon became the general fortress of cultural infiltration into Latin America. The U.S. diplomat Roy R. Rubottom Jr., who served as Assistant Secretary of State for Inter-American Affairs (1957-60), noted that, also in 1960, Mao Zedong appeared to have "gone out of his way" to receive Latin American Communist leaders and to exhort them to give their full backing to the kind of revolution he favoured. The following year, the Xinqiao Hotel would be the site of a major conference hosted by Zhou Enlai, who there encouraged intellectuals and cultural activists to start work again.

Following the end of World War II, the Communist movement was flourishing in Latin America, and as early as 1947 Mao Zedong was prompted to remark that "the Latin American peoples are not the obedient slaves of United States Imperialism". Chairman Mao and the Chinese communists' goal was the defeat of United States Imperialism, and Latin America was regarded as vital to attaining this goal, as it supported Mao Zedong’s theory of the establishment of rural revolutionary base areas. Chinese interest and activities in Latin America increased sharply in the early 1950s (there were believed to be 250,000 card-carrying communists active in the area), and the countries were of considerable interest to the Chinese and viewed as a fertile ground for advancing Communism, not least Red China's own brand of the ideology.

Some very light overall soiling to both sides, barely affecting the signature. An attractive example of one of the rarest and most sought-after autographs of all major political leaders and cultural icons of the 20th century. 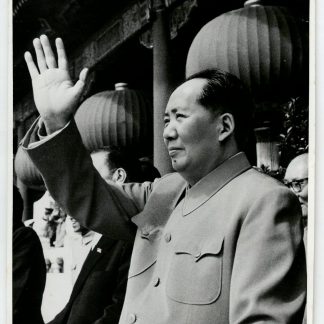