[Six-Mile Bottom near Newmarket], "October 1st, Friday", but probably a mistake for a date in October, [1878].

To "my dear friend", probably the English philosopher and critic George Henry Lewes, announcing his return to London the next day and promising to call in the afternoon before going on to Keppel Street: "I come tomorrow to London and will call upon you between 1 and 2 o'cl. I will go afterwards to Keppel Street which is in your neighbourhood […]".

Turgenev was a regular visitor to England. He had known Lewes during his student days in Berlin, but had not met him again for 32 years until 1871. Lewes and George Eliot became firm friends. The house from which the present letter is written, Six Mile Bottom (between Cambridge and Newmarket), was the home of William Henry Bullock (1837-1904), who had inherited the property and changed his name to Hall, being then known as W. H. Hall. The Lewes's were regular visitors to Six Mile Bottom, but it is not recorded that Turgenev was also a guest there until the well documented visit which began on 21 October 1878. It was on this occasion that Lewes proposed a toast to Turgenev as "the greatest living novelist", only to have the Russian reflect the accolade back to George Eliot.

The dating of this letter is problematic, "October 1st Friday" cannot refer accurately to the year 1878, since 1 October was a Tuesday that year. However it is known that Turgenev visited England in October 1878. 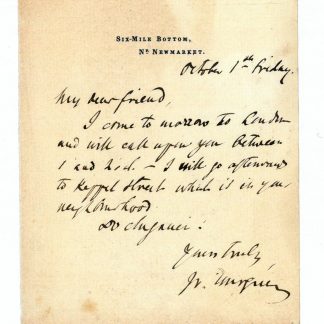