Two air route books for pilots of the Royal Air Force flying from Cairo to Karachi during World War II, "designed to help [them] to execute flights vital to our fronts in all theatres of war. The information which [they] contain is therefore also of use to the enemy, and must be safeguarded at all times" (p. 1).

The books are in fact useful guides to airports along the way, the plans depicting airfields in Egypt (Cairo West, Almaza, Payne, Heliopolis, Lydda and Luxor), as well as in Bahrein, Sharjah, Jiwani, Karachi, Wadi Halfa, Khartoum, Sheikh Othman, Khormaksar, Riyan and other places. For each airfield general information like coordinates, the length of the runways, the nature of ground signals, existing hangars, repair and fuel facilities, expectable weather conditions, distances to other places, radio aids, and local currency, as well as timetables of morning and evening twilight are given. The folding plans show emergency airfields in Egypt, Palestine and Syria, Iraq, Persia, and the Arabian Gulf area, as well as the routes between the Middle East and India.

Further, the booklets include instructions on what to do after a forced landing in unknown territory, advising to ration water and attract attention of rescue aircraft through a spread-out parachute or fires, including the order: "Don't drink the compass alcohol".

There is no standard collation for the books, as they were added to with monthly supplements. With the handwritten note "Compiled 21.2.45" as well as a signature to inner covers. The "from" and "to" fields on the title-pages (i.e., the front covers) are filled out by the same hand.

Covers show some small creases and edge tears; a few small ruststains, but on the whole well-preserved specimens from wartime Royal Air Force use. 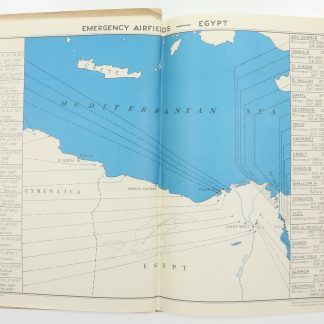