Starting out as a student of the sculptor Benedikt König (1842-1906) at the age of only six, Habich won a prize for his Columbus Monument for Bremerhaven in Munich in 1897 and joined the Darmstadt artists' colony in 1899, creating several monuments and sculptures in the city before being appointed professor at the Academy of Arts in Stuttgart.

A few small ink spots. Self-addressed by the collector on the reverse. The Mecklenburg physician Scharlau (b. 1888) assembled a collection of artists' autographs by personal application. 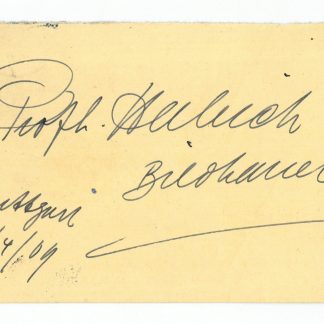