Developing his characteristic expressionist style in the 1920s, a style later termed "Magic Realism", Hofer created paintings with prophetic tendencies in the 1930s. His criticism of the Nazi regime caused him to lose his position as professor at the Berlin Academy of Arts in 1933, an institution he returned to as director in 1945.

Some small ink spots. Self-addressed by the collector on the reverse. The Mecklenburg physician Scharlau (b. 1888) assembled a collection of artists' autographs by personal application. 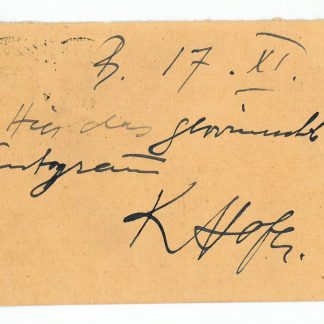