Studying at the Munich Academy from 1885, Urban applied himself to landscape painting; many of his works were inspired by the Bavarian town of Neubeuern. He opened his first studio in Munich in 1886 and was appointed president of the Munich artists' council in 1918.

Traces of a postmark; some small ink spots. Self-addressed by the collector on the reverse. The Mecklenburg physician Scharlau (b. 1888) assembled a collection of artists' autographs by personal application. 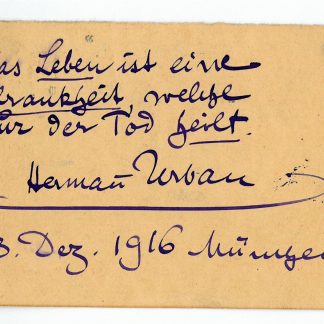