A son of the animal painter Heinrich von Zügel, Willy Zügel attended his father's painting class at the Munich Academy before turning towards sculpture in 1903. He produced popular animal figurines for the porcelain manufactures Rosenthal, Nymphenburg and Meißen, as well as publicly commissioned monuments, including a war memorial in Murrhardt.

A few small ink spots. Self-addressed by the collector on the reverse. The Mecklenburg physician Scharlau (b. 1888) assembled a collection of artists' autographs by personal application. 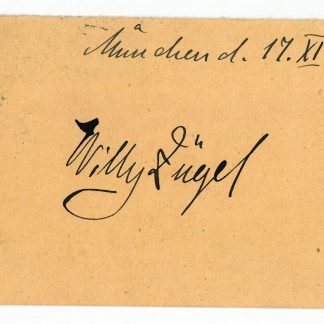