Goos's West-Indische paskaert in its very rare first state: a monumental nautical chart of the Atlantic Ocean on vellum in Mercator projection, used by the Dutch West Indian Company (WIC)

The "West-Indische Paskaert" engraved by Pieter Goos, in its rare first state, a nautical chart prepared for the Dutch West India Company (WIC) as an aid to crossing the Atlantic Ocean to the trading regions of the Americas and visiting trading posts in Africa. It shows parts of the east coast of North America, both coasts of South America, Mediterranean Europe and the west coast of Africa. Many "West-Indische Paskaerten", as these navigational charts were called, were reprinted over and over from new states of the copperplates. For more than a century Dutch and foreign seafarers profited from their use on transatlantic journeys. The great cartographer Willem Jansz. Blaeu (1571-1638) published the first "West-Indische Paskaert" around 1630 using manuscript charts and other documents of the Atlantic and its coasts, including information provided by the Dutch WIC navigators who sailed these routes. Being one of the first practical uses of the Mercator projection, Blaeu's small-scale nautical chart was the first useful chart for crossing the Atlantic Ocean, making it easier to plot a straight line course for long distances on one map. Around 1660 Pieter Goos engraved four large navigation charts on new copperplates, including the plate for his present "West-Indische Paskaert". The present copy shows the plate in its first state, the only copperplate that Goos actually engraved himself.

Pieter Goos (ca. 1616-75) was a Dutch cartographer, engraver and printer and publisher of maps and atlases, whose father Abraham Goos (ca. 1590-1643) published many globes and maps together with Jodocus Hondius and Johannes Janssonius. He was especially known for his sea charts and his "Zee-atlas ofte water-wereld" (first edition 1666), one of the best maritime atlases of its time. Goos's "West-Indische Paskaert" in its present first state is of the utmost rarity: 8 other copies are known, of which only 4 on vellum.

The "West-Indische Paskaert" remained one of the Dutch West India Company's most important nautical charts for decades, with several important map printers and publishers producing editions from various plates that went through numerous states. The present nautical chart therefore not only bears beautiful witness to the golden age of Dutch maritime history, exploration and cartography; it is also a very rare vellum copy showing the first state of the copperplate engraved by Goos himself. The map has been professionally restored, with the tears along the edges repaired and the brittle parts reinforced with Japanese paper, and the map is mounted on museum-quality preservation corrugated board which in turn is mounted on museum-quality honeycomb board. Somewhat faded, with a water stain in the left part, some smaller stains, the foot a little frayed (hardly affecting the map) and a little dust-soiled, but overall in good condition. 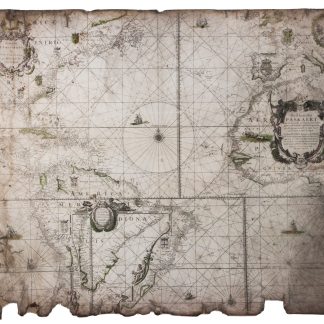