Second German translation of "Hayy ibn Yaqzan" by the 12th-century physician Ibn Tufail, widely considered the first philosophical novel and tremendously influential on Eastern and Western intellectual traditions alike. The Arabic tale (not to be confused with Avicenna's earlier like-named romance) was known in Europe as early as the 15th century through Pico della Mirandola's 1493 unpublished Latin translation, and scholars have since asserted its influence on Francis Bacon, Baruch Spinoza, Robert Boyle, the modern novel, Enlightenment thought, and even Robinson Crusoe. A bilingual Arabic and Latin edition appeared at Oxford in 1671, marking its first publication in Europe, and this was soon followed by English and Dutch translations. "A medieval philosophical treatise in literary form, written by the Andalusian philosopher Abu Bakr Ibn-Tufayl in the 1160s, it relates the story of human knowledge as it rises from a blank slate, through practical exploration of nature, to a mystical or direct experience of God. Its central argument is that human reason can independently access scientific knowledge unaided by religion or society and its conventions, leading not only to the tenets of natural philosophy but also to the attainment of mystical insight, the highest form of human knowledge" (Ben-Zaken, p. 2). Following the life of a young man stranded on an otherwise uninhabited island, it is easy to appreciate comparisons to Robinson Crusoe; given the protagonist's flair as an autodidact and faith in empiricism, it is similarly not difficult to understand the story's appeal to Enlightenment thinkers, whom this German edition would have served well. The work's Western influence is hardly to obscure its importance within the Arabic and Persian literary traditions, nor its influence on Islamic philosophy. The author was well placed to leave an enduring legacy. "He was the caliph's friend and confidant as well as his physician. The two could talk freely about the burning issues of the day, even including creation and whether the world had always been as we know it" (Goodman).

Unchanged re-issue of Eichhorn's new translation, styled "The Natural Man", which had first appeared the previous year. An earlier German translation, by J. G. Pritsius, had been published in 1726.

Ownership signature of the theologian Martin Hößler (b. 1877), dated 2 November 1919, written in indelible pencil on front flyleaf. Light dampstain to lower pastedown and moderate wear to the binding extremities. Complete, pagination notwithstanding, matching all digitized copies available for comparison. An appealing copy. 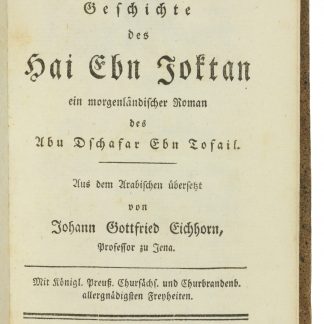