From the first printing press in the Arab world

Folio (220 x 315 mm). 8 issues printed in French and Arabic in two columns, each between 2 and 16 pages. All with the woodcut vignette of the French Republic showing Marianne and the motto "Liberté Egalité".

A unique ensemble of these exceedingly rare regulations documenting the first months of the administration of the newly appointed commander-in-chief "Abdallah" Menou, who succeeded Kleber after his assassination in June.

In contrast to his predecessor, who intended to rule Egypt as an occupied territory, General Menou had colonial aims and even considered granting French citizenship to all Egyptians. Soon after his arrival in 1798 he married a woman from a noble Cairo family, converted to Islam and took the name of Abdallah.

Covering a wide range of topics such as tax and fiscal matters, fishing and hunting rights, duties of local dignitaries ("cheyks el-beled"), customs and border regulations, rules for navigation on the Nile, taxation of merchants, craftsmen and workers, as well as the rights of various religious minorities (Jews and Copts among others), the present documents offer a vastly more detailed insight into the French administration of Egypt than the more widely distributed single-page broadsides of daily orders with which they were originally issued ("Inséré dans l'ordre du jour ..."). Printed by first printing press in the Arab world, all issues of these bilingual regulations and orders are of the utmost rarity: four of the eight publications contained in the present collection are not recorded in OCLC.

Unbound as issued. Well preserved throughout. Detailed list and collations of the individual publications available upon request. 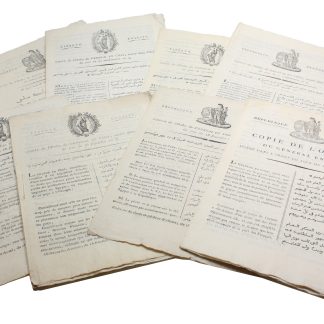