To Grzegorz Kontski, father of the pianist Antoine de Kontski, concerning a concert with Garaudé's later wife and student Jeanne Digout de Bincourt and his son Alexis (1821-54). Garaudé cancels an engagement of Kontski's son, probably Antoine's younger brother Stanislaw, as Mademoiselle Bincourt is "extremely timid" and he is "certain that she would sing poorly" were there to be "slightest inquietude about her accompanist". Garaudé does not wish to question the talent of Kontski's son but "does not believe that he is already in possession of the experience necessary to accompany Italian canto well". It is therefore "indispensable" that his son Alexis "accompany the air and the duo".

Alexis de Garaudé is best known as an author of educational books on singing and solfège, some of which are still in print. His son Alexis, who died young, started a promising career as a pianist and composer, winning the second Grand Prix de Rome in 1841 and publishing a successful piano transcription of Meyerbeer's "La Marche du sacre du Prophète".

Several tears, traces of former mounting, and minor browning to the upper border. 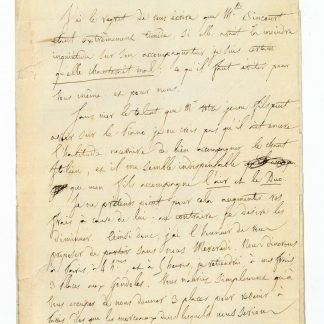