"Each poem, I think, should be as close to a suicide note as possible"

4to. Together 23¼ pp. on 20 ff. With multiple manuscript emendations in different types of ink and crayon, 5 sketches, 1 black and white photograph of Bukowski, and 1 typed envelope.

Correspondence archive addressed to the American painter and poet Kay "Kaja" Johnson, who was well known within the Beat community in San Francisco during the 1950s. In this extensive collection Bukowski discusses his literary endeavours, the indulgences and miseries of daily life, suicidal ideation, and his job at the Post Office, but above all he reflects on their shared preoccupation with poetry: "Poetry has been too much the exclusive territory of the wise who have turned out to be not so wise after all. Who wants to hear a rhyming poem when he is poised on the top of a building? Or a criticism of Keats? [...] Each poem, I think, should be as close to a suicide note as possible, saying what the mind must say and why [...]" (28 July 1961). Elsewhere, his daily observations verge on the poetic: "[Sometimes] I lift a tall can of beer and the coldness touches my insides and nobody is bothering with me. There Hemingway has gone down under the shotgun and I am standing in a dirty kitchen alive. This is important: standing in a dirty kitchen alive [...]" (28 July 1961).

After publishing a handful of stories in the mid-1940s, Charles Bukowski grew disillusioned with the literary world and descended into a decade of heavy drinking, a time he would later call his "lost years." This period was punctuated by painful physical ailments, including a life-threatening ulcer. This correspondence finds the author on the cusp of a newly productive period - working at the Los Angeles Post Office, and re-engaging with an assortment of alternative literary magazines. He addresses his literary forebears head on, including Hemingway ("I said Hemingway was spelled with one M. Why do you insist on 2? You are making him 2twice as heavy and he was overrated as it is [...] although all this does not include the very great book his only one A FAREWELL TO ARMS", 17 August 1961) and Henry Miller ("I think a person like Henry Miller [...] wanted too badly to become famous, wanted this more than the flow. He got his fame, and that's all it is: coins and carvings of fame; the light is out of his face, all the wires are cut [...]", "July something" 1961).

Fame and recognition are clearly on the author's mind, and they continue to be discussed in his characteristically irreverent manner. During his lost years, he tells Kaja that drinking was his poetry, he would "fall acroos [!] the rug drunk and beat my hands on the rug and scream, I AM A GODDAMN GENIUS AND NOBODY KNOWS IT BUT I" for the amusement of a companion (17 August 1961). Drunken outbursts aside, he speaks more candidly about his literary standing in America, going on to say: "I am glad the usa ignores me. Fame is bad, Kaja. I can think of very few people who remained as they were before fame. I thank god, any god, who has saved me from this thing [...]" (17 August 1961). These reflections on literary fame come on the heels of the publication of the author's first chapbook of poems in October 1960, entitled "Flower, Fist and Bestial Wail", and the impending publication of his second, announcing on 7 November: "My latest book is out (ha, ha, I can say latest now because this makes 2), LONGSHOT POMES FOR BROKE PLAYERS, from 7 Poets Press [...]".

Throughout this archive, Bukowski refers to his work with Jon Edgar Webb and The Outsider, as well as Targets, and assorted other small literary magazines (Quicksilver, Satis etc.), in addition to referencing Carl Larsen (who acted as editor for "Longshot Poems"), Caresse Crosby and the Black Sun Press, Sheri Martinelli, and others.

Kaja Johnson was an established poet in her own right, and Bukowski praises her writing: "I told Jon [Webb] I thought your poem in OUTSIDER #1 one of the best, which it was, saying the odd things [...]" (28 July 1961). When their correspondence picks up, Kaja is living in New Orleans, and Bukowski attempts to put her in touch with the writer John William Corrington, then teaching at LSU. Bukoswki’s letter of "August 14, I think" references an impending move ("Are you going to France or New York? or Los Angeles? or where?"), followed by a vague hope she might move to California ("I hope you settle in Frisco because then I can leap from my window and meet you there on the way to the ground [...]", 17 August 1961), only to write to her in Paris shortly afterwards: "To sit backwards in your bed, writing to Kaja in Paris, and thinking of hot buttered garlic frenchbread [...]", "Sept. ending" 1961). In Paris, Kaja took up residence at the so-called Beat Hotel on 9 Rue Gît-le-Cœur in the Latin Quarter. Throughout the 1950s and 1960s, the previously run-down and unnamed hotel became a haven for artists, writers, poets, and musicians, including some of the biggest names of the Beat movement: Allen Ginsberg, Peter Orlovsky, William S. Burroughs, and Gregory Corso.

The rough sketches are caricatures of himself at his typewriter smoking a cigarette, frequently with a can of beer close by. 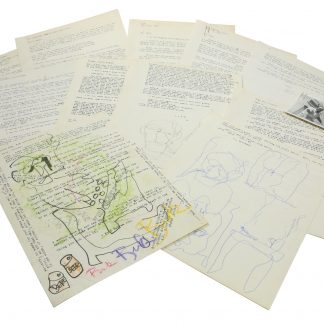