"Alice in Wonderland": presentation copy of the script, for and from Alice

Folio (220 x 354 mm). (3), A1-8, 642, 4 ff. Mimeographed typescript and storyboard comprising 642 illustrations by William Cameron Menzies. Extra-illustrated with 44 black and white production photographs. Contemporary giltstamped full red morocco, spine gilt in compartments. Signed by 27 members of the cast. Copy owned by Charlotte Henry, the actress who played Alice, signed and inscribed by her to another girl on the frontispiece photograph: "To Ann Waddington from Alice in Wonderland / Charlotte Henry".

De luxe copy, owned by "Alice", of the script to the 1933 Paramount Pictures adaptation of Lewis Carroll's classic. The script appears to have been available in a numbered edition (number 22 was sold at Sotheby's in 1975) and an un-numbered edition for members of the production (cast-member Ronald “Baby LeRoy” Overacker’s copy sold at Bonhams, Los Angeles, in 2019); both were bound in wrappers. The present specimen is a sumptuously bound, extra-illustrated edition for the actress who played the title character, featuring not only 44 inserted black-and-white production photographs (captioned on the reverse), but also the signatures of 27 cast members on the half-title.

Despite an all-star cast including Cary Grant as the Mock Turtle, Gary Cooper as The White Knight, W. C. Fields as Humpty Dumpty, Edna May Oliver as the Red Queen, Edward Everett Horton as The Hatter, Charlie Ruggles as The March Hare, and Baby LeRoy as The Joker, the film adaptation proved a famously unsuccessful experiment by Paramount. It remains the only major live-action Hollywood production to adapt Carroll's original "Alice" stories. Charlotte Henry (1914-1980) enjoyed her first leading role as Alice, beating over 6,800 other actresses who auditioned. The recipient Ann Waddington, to whom Henry gifted her sumptuous memento, is unidentified.

The American film director, screenwriter, and producer Joseph L. Mankiewicz (1909-93) enjoyed a long Hollywood career. He is best remembered for "All About Eve" (1950), which was nominated for 14 Academy Awards and won six. William Cameron Menzies (1896-1957) was a hugely influential production designer and art director. He received an Honorary Academy Award "for outstanding achievement in the use of color for the enhancement of dramatic mood" in "Gone With the Wind".

Occasional tears to some leaves, some photographs with creases and tears, occasional child's scribbles. Hinges professionally restored. A unique survival. 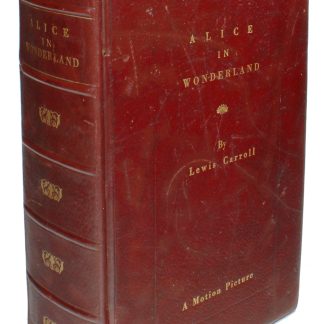